Reports from Syria of U.S. military engagement with Russian troops By The Wayne Madsen Report

Reports from Syria of U.S. military engagement with Russian troops
By The Wayne Madsen Report

In a statement from Moscow, Russia's deputy foreign minister Sergei Ryabkov blamed the United States for the recent combat death in Syria of Russian Lt. General Valery Asapov. The general was killed recently in mortar shelling carried out by the Islamic State of Iraq and the Levant (ISIL), near the besieged Euphrates River town of Deir Az Zor. Asapov, a military adviser to the Syrian government, was killed at a Syrian Army command field station while directing troops fighting to liberate Deir Az Zor from ISIL.

Reports from the combat zone in northeastern Syria suggest that ISIL and the U.S.-backed Syrian Democratic Front (SDF) have joined forces in fighting against Syrian government forces and their Russian allies. WMR's information from U.S. Special Forces sources indicates that American troops have engaged Russian, Syrian, and Iranian troops on behalf of ISIL and its SDF partners. One communication indicated that if any U.S. Special Forces personnel are killed in combat, the Pentagon will inform the next-of-kin that they were not killed in Syria, but died elsewhere. It has long been Pentagon policy to claim that Special Forces troops who are killed on covert missions died while on "training missions" far from the actual combat zones. 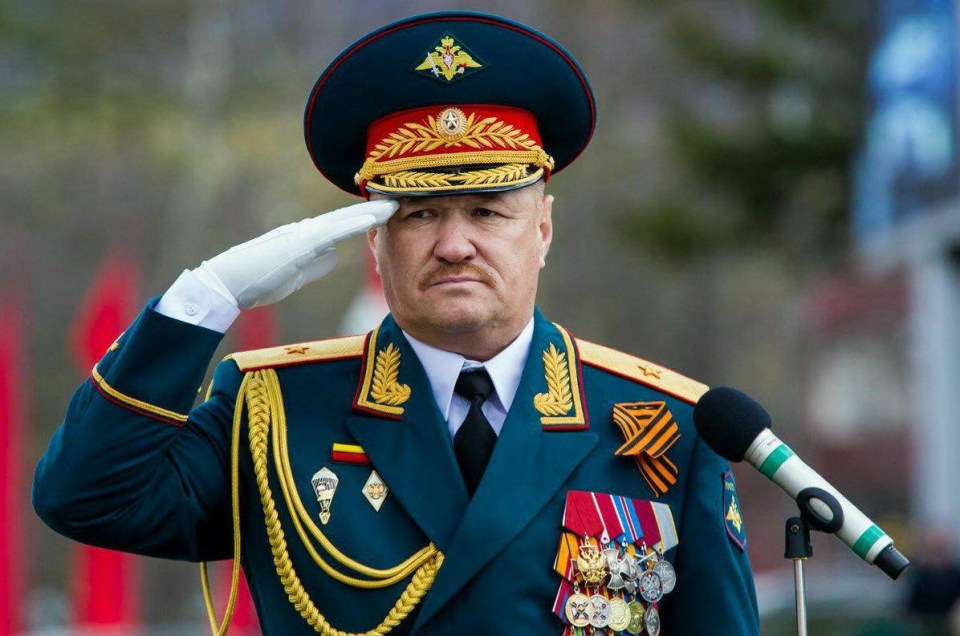 Russian Lt. General Valery Asapov killed in Syria combat. Russia blames U.S. for his death as U.S. Special Forces in Syria break OPSEC to warn of U.S.-Russian combat engagement
Asapov is not the only Russian military member who has been killed in Syria at the hands of U.S.-linked jihadist forces. The Russian government has not disclosed the total number of Russian killed-in-action but some estimates have the total as being over 30.

WMR has been informed of an important detail concerning the mysterious airline company, Air Cargo Carrier (ACC), based at General Mitchell International Airport in Milwaukee, Wisconsin. On September 19, 2017, WMR reported that an individual associated with ACC threatened a group of graduate engineering students at the University of Alaska with non-employability because of their research into the circumstances surrounding the collapse of World Trade Center Building 7 during the late afternoon of September 11, 2001. There was an inference that the engineering students were "aiding terrorism" with their research.

Our report stated that ACC is owned by ACC Holding, Inc. ACC also owns Telford Aviation, Inc., also based in Milwaukee, which also does business as "The Telford Group." ACC, which is also known as ACC Integrated Services, Inc., "offers short notice service throughout North America, Mexico, and the Caribbean." ACC was founded in 1986, at the height of the Iran-contra affair, and specializes in airlifting freight to various destinations in North America and the Caribbean.

According to corporate records for Telford Aviation, Inc., its chairman of the board and chief executive officer was Wirt D. Walker III, a cousin of George W.  Bush and his brother, Marvin Bush. Walker and Marvin Bush figured heavily in the investigation of firms linked to both the World Trade Center and Dulles International Airport, nexuses for the 9/11 events. Walker and Marvin Bush are featured in this editor's book, "Jaded Tasks: Brass Plates, Big Oil & Black Ops": 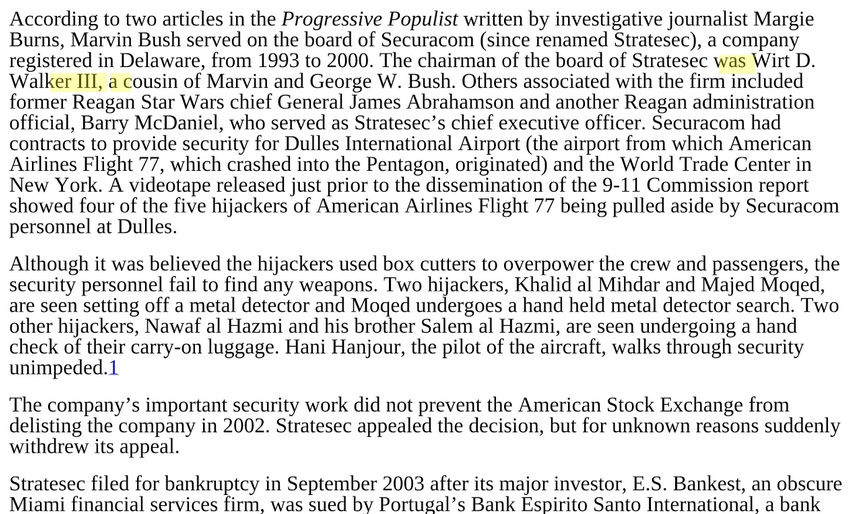 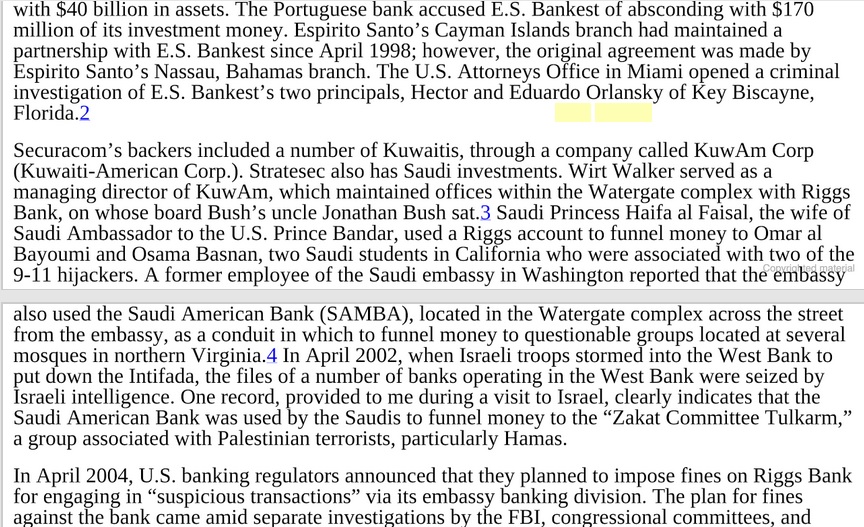 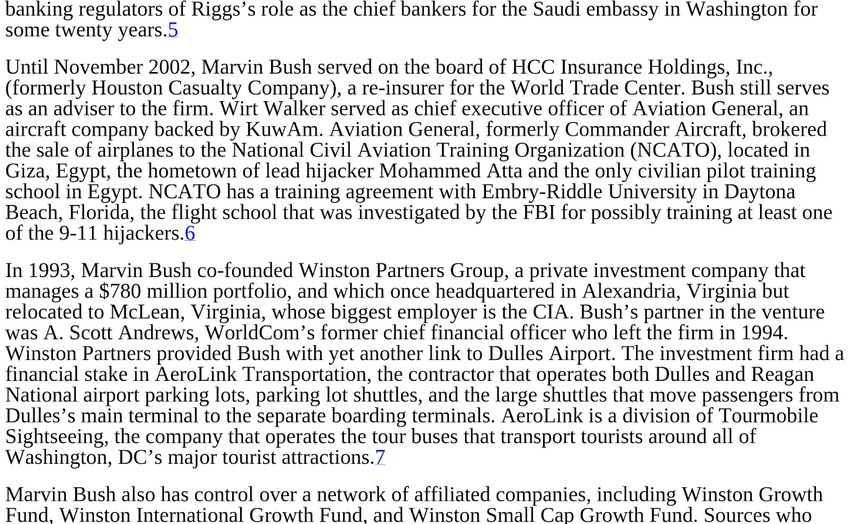 The association of members of the Bush family with a reputed CIA airline front company provides more highly-relevant circumstantial evidence on the involvement of the Bush family with the events of 9/11. Former president George H. W. Bush was diverted to Milwaukee, the headquarters of Air Cargo Carrier, while in-flight from Washington, DC to St. Paul, Minnesota during the morning of the 9/11 attack. Bush had spent the previous day and night at the White House. Bush claims he and Barbara Bush were whisked off to a motel well outside the city limits of Milwaukee by the U.S. Secret Service. During the night and morning of September 10-11, 2001, Bush, Sr. attended a board meeting of The Carlyle Group at the Ritz-Carlton Hotel in Washington. Also attending that meeting was the brother of Osama bin Laden.

The founder of Telford Aviation, Telford Allen II, was killed on August 1, 2010 in the crash of his Cessna A185F floatplane into Moosehead Lake in Rockwood, Maine. The National Transportation Safety Board (NTSB) concluded that Allen had taken too much of the over-the-counter antihistamine, diphenhydramine, which impaired his judgment and caused him to crash his plane. The NTSB interim report stated: "While the pilot may have been having difficulty sleeping due to back pain or his impending surgery or possible chemotherapy, the investigation was unable to determine that fatigue was a factor in the accident." While Allen was killed, a passenger, although injured, survived the crash. The passenger indicated to the Bangor Daily News that they "had a normal flight” and the location of the crash was in "the same area" Allen always landed.
Some four months after Allen's death in Maine, two ACC pilots, Kevin Kuranz of Sheboygan, Wisconsin and Christopher Schmidt of Maryville, Tennessee, were arrested by the Dominican Republic police in Santo Domingo on December 2, 2010. 321 pounds of cocaine and 4 pounds of heroin were discovered hidden beneath the floor boards and behind the wall panels of their ACC-owned aircraft. Some 19 members of the Dominican military were also arrested in connection with the illegal narcotics discovery.

Kuranz and Schmidt, who were temporarily based in Puerto Rico, were released on bail of $12,160 each after an intercession by ACC with the Dominican Republic's ambassador in Washington and the government in Santo Domingo. The two pilots agreed to return to Santo Domingo in the event of a trial, however none was ever scheduled for them. The Dominican prosecutor assigned to the case, Carmen Diaz Amezquita, wanted the two American pilots held until he could fully prepare the case. The presiding judge overruled the prosecutor and ordered the pilots released on bail. The case was never brought to trial and 12 of the Dominican military personnel initially arrested in connection with the drug bust were released without charges being brought.
What is discovered about ACC, Telford Aviation, Stratesec/Securacom, Aviation General, and Commander Aircraft are interlocking directorships involving members of the Bush family and their business associates. 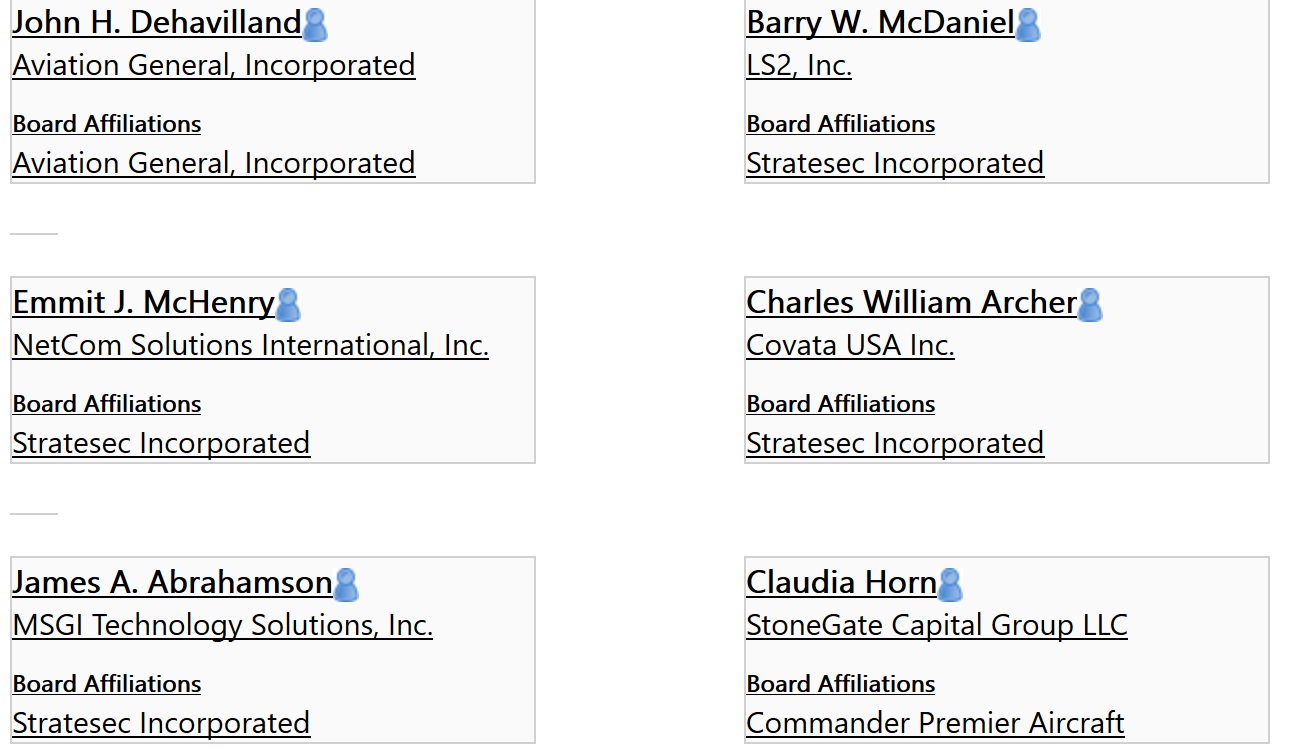 From the above information, Wirt Walker III, Abrahamson, and McDaniel, previously cited in "Jaded Tasks," are found, along with Mishal Yousef Saud al-Sabah, the Kuwaiti chairman of KuWam and board member of Commander Premier Aircraft Corporation. There are board interlocks between StoneGate Capital Group LLC, with offices in Dallas and New York City, and Commander Aircraft and Stratesec (formerly Securacom). The Securities and Exchange Commission reportedly investigated Wirt Walker and his wife Sally for insider trading prior to 9/11. Their September 6, 2001 purchase of 56,000 shares of Stratesec, which had security contracts for the World Trade Center, Dulles airport (where highjacked American Airlines flight 77 originated), and United Airlines. The stock doubled in value on the morning of September 11 and remained that way until the market re-opened on September 17. The SEC recommended that the Walkers be investigated for 9/11-related insider trading but the FBI cleared the couple and considered the case closed.

WMR landed the story on the suspicious death of Marvin Bush's maid, near Alexandria, Virginia on September 29, 2003. Bertha Champagne was crushed by her own vehicle on Mr. Bush's driveway after she told the president's brother she had a "video" to show him.

Now we have an individual associated with a Walker/Bush-influenced company, Air Cargo Carriers, making veiled threats to engineering students who have been researching the collapse of WTC Building 7, a facility for which Securacom/Stratesec had a contract for security. The conclusion of the University of Alaska report is that fire from the impact of the two planes into WTC 1 and 2 (the Twin Towers) was not a factor in the internal demolition-like collapse of Building 7. Apparently, some members of the Walker and Bush families do not appreciate engineering experts sticking their noses into an area where the Walkers and Bushes are on very shaky ground.
Posted by Macu at 9/27/2017 10:26:00 AM