As Donald Trump harangued North Korea, Iran, and Venezuela during his September 19 neocon-drafted speech to the United Nations, one leader in the audience was beaming and applauding with almost every Trump syllable. Israeli Prime Minister Binyamin Netanyahu and his wife Sara, both facing prison terms in their country for corruption, was encouraged by Trump's tough stand against "rogue regimes."

Trump lambasted the P5+1 nuclear accord with Iran, a move that played right into Netanyahu's hands. Barack Obama and the five members of the UN Security Council plus Germany hammered out an agreement with Iran that saw the Iranians give up any nuclear weapons development in return for the curbing of international sanctions. Israel was never happy with the deal and it used its foreign lobbies, albeit unsuccessfully, to sink the deal.

Netanyahu cheered on Trump's verbal attack on North Korea -- one that saw the president call North Korean leader Kim Jong Un "rocket man" and threatening to "destroy" North Korea. Although the UN has imposed severe sanctions on North Korea, Israelis have been in the process of breaking it through its international Chabad network of Hasidic criminal syndicates. Ironically, one of the methods by which Israeli criminals are helping North Korea to evade sanctions is the sale of North Korean-caught Pacific Ocean crabs in cans that label their country-of-origin as either Russia or China.

Kosher dietary laws strictly ban the consumption of shell fish like crabs, lobsters, and scallops. When it comes to making money illicitly, however, the Chabadniks are more than willing to discard their religious tenets. North Korea is well-known for producing and marketing counterfeit goods, including U.S. brand cigarettes and other consumer items. Chabad, which also excels at counterfeiting, has found a natural business partner in North Korea, particularly in Asia, where the Hebrew- and Yiddish-speaking Hasidics are at a disadvantage.

The "Crab Mafia," as it is known in northeast Asia, procures seafood, often poached from restricted Sea of Japan or Bering Sea waters by often unflagged North Korean fishing trawlers, and cans it in China or Russia with Chinese or Russian country-of-origin labeling (COOL). The North Koreans receive hard currency, which is now severely restricted by international sanctions, in return for their catch. Pirated seafood sold under false labels constitute a huge business. In 2013, false country-of-origin crab sold in the United States amounted to some $600 million. Much of that money ended up in the hands of the Crab Mafia and North Korea.

The Chabadniks, who constitute an unofficial virtual arm of the Israeli Mossad, have extended their operations in the Russian Far Eastern city of Vladivostok and the Joseph Stalin-created Jewish Autonomous Republic, which sits along the Trans-Siberian railway on the border with China. Once referred to as the "Soviet Zion," Stalin saw the Far Eastern region as the future homeland of the Jewish people.

One of many unflagged North Korean fishing boats that ply the Sea of Japan and poach in restricted waters and sell their catch to sanction-busting Jewish criminals operating from Vladivostok and Birobidzhan
Dealing with the northeast Asian Crab Mafia has been lucrative for the Chabad smugglers and counterfeiters of Birobidzhan. Canneries in adjacent Khabarovsk and Primorsky, the latter the location of Vladivostok, are plentiful. Trump, of course, had no idea that his threats against North Korea are meaningless as long as Israel tolerates Israeli nationals working to circumvent UN economic sanctions against North Korea. Nor does it help that Trump's key confidantes, son-in-law Jared Kushner and his wife Ivanka Trump, are active supporters of Chabad.

The re-establishment of Jewish control over Birobidzhan is financed by a foundation called Bereshit. The first word in the Torah is bereshit, which is translated as "in the beginning." Some of the financing network for the Bereshit Foundation comes from Mikhail Fridman, German Khan, and Pyotr Aven, all of whom are linked to Russia's Alfa Bank, Jared Kushner, and the financing of the Trump presidential campaign, and the Wexner Foundation of Les Wexner, the billionaire mentor of Trump friend and convicted child sex offender Jeffrey Epstein. When Trump threatened to "destroy" North Korea with Netanyahu nodding his head approvingly, little did anyone else inside the General Assembly realize that the wealthy allies of Trump and Netanyahu have been helping North Korea to evade economic sanctions from far-flung Chabad outposts in Siberia.

The annual commemoration of the 9/11 attack brings out the best and, sometimes, the worst in people. An aspect of the worst was recently visited upon engineering graduate students at the University of Alaska.

The graduate students, who assisted Professor Leroy Hulsey in his research, have concluded, following a two-year Finite Element Analysis of World Trade Center building number 7, that the National Institute of Standards and Technology (NIST) report on the collapse of the building during the late afternoon of September 11, 2001 was seriously flawed. Hulsey and his team concluded that building 7 did not collapse due to a fire, which was alleged by NIST.

Hulsey and his graduate students received a letter from a principal of a murky company called Air Cargo Carrier (ACC), based at General Mitchell International Airport in Milwaukee, Wisconsin, that clearly intimidated Hulsey and the engineering students. The letter implied that the group was somehow aiding and aiding "terrorism" with their research on the collapse of building 7 and that the future careers of the graduate students could be in jeopardy. It should be noted that the University of Alaska engineering department is considered a center of excellence on the construction of tall buildings, especially when it comes to their withstanding earthquakes.

ACC is owned by ACC Holding, Inc. ACC also owns Telford Aviation, Inc., also based in Milwaukee, and also does business as "The Telford Group." ACC, which is also known as ACC Integrated Services, Inc., "offers short notice service throughout North America, Mexico, and the Caribbean." ACC was founded in 1986, at the height of the Iran-contra affair, and specializes in airlifting freight to various destinations in North America and the Caribbean. The President of ACC is listed as James M. Germek of Milwaukee. A subsidiary of ACC is Milwaukee Avionics & Instruments. ACC also serves Cincinnati/Northern Kentucky International Airport.

Ironically, former president George H. W. Bush was diverted to Milwaukee while in flight from Washington, DC to St. Paul, Minnesota during the morning of the 9/11 attack. Bush had spent the previous day and night at the White House. Bush claims he and Barbara Bush were whisked off to a motel well outside the city limits of Milwaukee by the U.S. Secret Service. During the night and morning of September 10-11, 2001, Bush, Sr. attended a board meeting of The Carlyle Group at the Ritz-Carlton Hotel in Washington. Also attending that meeting was the brother of Osama bin Laden, according to The Washington Post:

"It didn’t help that as the World Trade Center burned on Sept. 11, 2001, the news interrupted a Carlyle business conference at the Ritz-Carlton Hotel here attended by a brother of Osama bin Laden [Shafiq bin Laden]. Former president Bush [senior], a fellow investor, had been with him at the conference the previous day. (Greg Schneider, 'Pairing the Powerful With the Rich,' Washington Post, March 16, 2003.")

The author of the intimidating letter has a relationship with ACC. He is an attorney who uses addresses in Janesville, Wisconsin and Brooklyn, New York. Janesville is the hometown of U.S. House Speaker Paul Ryan.
Telford operates a facility at the Aberdeen Proving Ground in Maryland under a Department of Defense contract. Aberdeen is tasked with testing new ordinance, including explosives, for the U.S. military. Telford also maintains an office in Dothan, Alabama, which is near the Army's Fort Rucker aviation training base.

The owner and founder of Telford Aviation, Telford Allen II, 64, was killed on August 1, 2010 in the crash of his Cessna A185F floatplane into Moosehead Lake in Rockwood, Maine. The National Transportation Safety Board (NTSB) concluded that Allen had taken too much of the over-the-counter antihistamine, diphenhydramine, which impaired his judgment and caused him to crash his plane. The NTSB interim report stated: "While the pilot may have been having difficulty sleeping due to back pain or his impending surgery or possible chemotherapy, the investigation was unable to determine that fatigue was a factor in the accident." While Allen was killed, a passenger, although injured, survived the crash. The passenger indicated to the Bangor Daily News that they "had a normal flight” and the location of the crash was in "the same area" Allen always landed.

Telford Allen [left], founder of Telford Aviation, killed in suspicious plane crash in 2010. Left-to-right, second photo: ACC pilots Kevin Kuranz and Christopher Schmidt, arrested in Dec. 2010 after cocaine and heroin was discovered on board their chartered aircraft in the Dominican Republic.
Some four months after Allen's death in Maine, two ACC pilots, Kevin Kuranz of Sheboygan, Wisconsin and Christopher Schmidt of Maryville, Tennessee, were arrested by the Dominican Republic police in Santo Domingo on December 2, 2010. 321 pounds of cocaine and 4 pounds of heroin were discovered hidden beneath the floor boards and behind the wall panels of their ACC-owned aircraft. Some 19 members of the Dominican military were also arrested in connection with the illegal narcotics discovery.

Kuranz and Schmidt, who were temporarily based in Puerto Rico, were released on bail of $12,160 each after an intercession by ACC with the Dominican Republic's ambassador in Washington and the government in Santo Domingo. The two pilots agreed to return to Santo Domingo in the event of a trial, however none was ever scheduled for them. The Dominican prosecutor assigned to the case, Carmen Diaz Amezquita, wanted the two American pilots held until he could fully prepare the case. The presiding judge overruled the prosecutor and ordered the pilots released on bail. The case was never brought to trial and 12 of the Dominican military personnel initially arrested in connection with the drug bust were released without charges being brought. 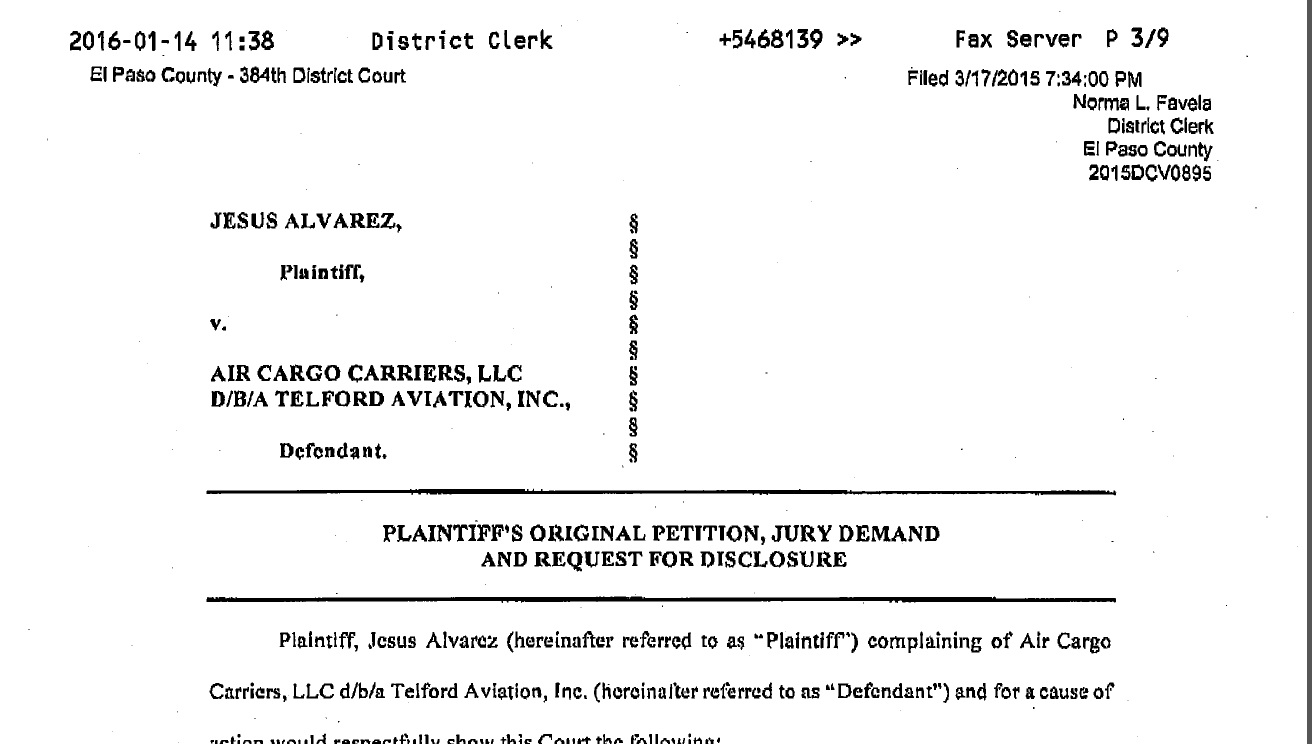 Click on above for full download
ACC has been involved in a number of civil cases brought by ex-employees and business partners.  In 2015, Jesus Alvarez, an ACC/Telford Field Service Engineer in Texas, filed a discrimination suit against Air Cargo Carrier LLC/Telford Aviation, Inc. in the Texas District Court in El Paso, Texas.  Alvarez claimed that Anglo-American employees of ACC/Telford subjected him to harassment over his Hispanic heritage, claiming that Mexicans are "worthless." The harassment continued until ACC fired Alvarez. The El Paso court dismissed Alvarez's lawsuit for damages. Court records indicate that ACC has been active not only in west Texas, but also in Arkansas in the late 1980s and 90s.  ACC's operations in Arkansas would place it within the milieu of several Central Intelligence Agency covert operations in support of the Nicaraguan contras and Colombian drug cartels.