MSA Resolution to Boycott Apartheid Israel, and to Stop Apartheid on Campus

MSA Resolution to Boycott Apartheid Israel, and to Stop Apartheid on Campus

Malcolm X, meeting with the leadership of the Palestine Liberation Organization in 1964.

This was sixteen years after European Zionists invaded Palestine, destroying over 400 Palestinian villages.

It was an extremely violent ethnic cleansing operation.

This Resolution has been proposed for an immediate vote by the Michigan Student Assembly, at the University of Michigan.

This Resolution then was torn up by the Assembly's General Counsel, as the "Michigan Daily" reporter watched:

But the Resolution was again presented to the Assembly for a vote.

This Resolution has also been proposed for a vote by the University's LSA Student Government:

and to Stop Apartheid on Campus

WHEREAS, White Supremacism, including Zionism, is the most genocidal force on Earth,

WHEREAS, Congress has paid $300 billion to Israel, according to Congressman John Dingell,

WHEREAS, Israel spent that money on a genocidal ethnic cleansing campaign against the Palestinian people, which has culminated in the Israeli siege against Gaza,

WHEREAS, Israel has forced 1.5 million Palestinians into a concentration-camp existence in Gaza, where childhood malnutrition and anemia are rampant,

WHEREAS, Israel is threatening to unleash a “Holocaust” on Gaza,

WHEREAS, Malcolm X was right— the Zionists had no “legal or moral right to invade Arab Palestine, uproot its Arab citizens from their homes and seize all Arab property for themselves”

WHEREAS, Israel’s alliance with Apartheid South Africa was "more intimate and more extensive than anything similar in Israel’s history", according to Professor Benjamin Beit-Hallahmi,

WHEREAS, Israel has hundreds of nuclear weapons, which it tried to share with Apartheid South Africa,

WHEREAS, Israel is training its pilots to nuke Iran, a land of 76 million people who have never invaded anyone,

WHEREAS, Israel trained and oversaw SAVAK, the brutal force of torturers who kept the Shah of Iran in power,

WHEREAS, the United States has been bleeding Iran with economic sanctions, then with U.S.-imposed dictatorship, then with U.S.-fueled invasions, almost continuously since 1952,

WHEREAS, those economic sanctions still make it impossible for Iranians to get spare parts for any airplane, from anywhere in the world,

WHEREAS, Israel is demanding even crueler economic sanctions against Iran,

THEREFORE, the Michigan Student Assembly demands that Congress impose a total boycott against all Israeli products,

THEREFORE, we demand that Congress cut off all aid to the racist state of Israel, the last Apartheid State on Earth.

THEREFORE, we demand that the University of Michigan Board of Regents declare a boycott against all products imported from the racist state of Israel.

WHEREAS, Congress has spent $1 trillion to kill millions of Iraqis since 1991,

WHEREAS, Congress has killed over a million Afghans since the 1980’s, using a series of unbelievable excuses,

WHEREAS, Congress’s trillion-dollar genocide against Muslim lands is conducted at the direct expense of Black America,

WHEREAS, Congress’s trillion-dollar occupation of Muslim lands is conducted at the direct expense of Black America,

THEREFORE, the Michigan Student Assembly demands that Congress immediately remove its trillion-dollar army of occupation from every nation on Earth, because that army only brings coups, torture, racism, and death to the planet;

THEREFORE, we demand that Congress immediately spend that trillion dollars, which was stolen from Black America, on the immediate rebuilding of Detroit, including mass transit that every Detroiter can walk to, including the best elementary, secondary, and university education in the nation, including the best neighborhood clinics, the best neighborhood libraries, and the best housing infrastructure in the nation, and including the necessary industrial facilities to build all of those things, and to employ every Detroiter of working age, with full union wages and benefits,

--the University should Admit every Black high school graduate.

WHEREAS, centuries of government policy, backed up by organized white violence at every level, has attempted to beat down African political power, financial power, industrial power, and landholding power, from the Congo to Chicago,

WHEREAS, Martin Luther King Jr. was right— the U.S. government is “the greatest purveyor of violence in the world today”,

WHEREAS, the U.S. has murdered and imprisoned African and African-American leadership on a mind-boggling scale, from Lumumba in the Congo, to Mandela in South Africa, to Fred Hampton in Chicago, to Marcus Garvey, to the Orangeburg Massacre, to the Jackson State Massacre, to the U.S.-Israeli-South-African invasion of Angola in the 1970’s, to the U.S.-Israeli-South-African creation of death squads across the African continent which have murdered millions and stripped Africa of unimaginable wealth,

WHEREAS, white political, economic, employment, and educational power has always been built on massive federal subsidies, from the railroads in the 19th century, to the government-backed white academies created to suck away resources from any public educational system that might benefit Black students,

THEREFORE, the Michigan Student Assembly demands that the University of Michigan Board of Regents immediately guarantee admission, tuition-free, to every Black student who graduates from every Michigan high school, together with year-round tutoring for every new student who needs it;

THERFORE, we declare, in advance, a highly visible picket line and a 3-day student strike, if any state authority attempts to “stand in the schoolhouse door” to block the open admission of Black students to this University. 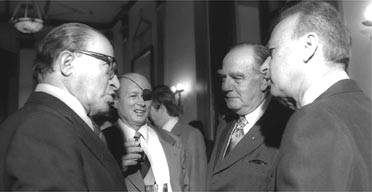 In 1975, Israel had helped South Africa to invade Angola, sending military advisers and electronic equipment to the front.

Lords of Misrule - THE YES MEN

The bottle looks beautiful. It sports an old-fashioned spring-top stopper. The red, diamond-shaped label features an elegant font. From a distance, the silhouetted landscape on the label looks exotic. It is, like all fine gourmet water, "bottled at source." Even the French name of the water suggests elegance: B'eau Pal.

But wait: B'eau Pal? That sounds rather familiar. You look at the label more carefully. The top of the label reads: "25 years of pollution." The picture on the label isn't an exotic location after all. It's...the Union Carbide plant in Bhopal, India that poisoned a half a million people and killed thousands back in 1984 when it accidentally released tons of methyl isocyanate.

B'eau Pal is the work of the Yes Men, the dynamic duo of disinformation. Five years ago, one of the pair, Andy Bichlbaum, appeared on BBC as a spokesman for Dow Chemical, which now owns Union Carbide, to announce that his company would provide $12 billion in medical care for the 120,000 victims of the Bhopal calamity and fully clean up the site. Dow lost $2 billion in market value in 20 minutes. That's how long it took before the hoax was exposed.

"We demonstrated what would happen if Dow did do the right thing in Bhopal," Bichlbaum told Foreign Policy In Focus (FPIF) senior analyst Mark Engler in Pranksters Fixing the World. "What happened? The stock market punished Dow. And if it had really happened, the stock market would have kept punishing Dow. The guy who made the decision would have lost his job. Or he would have been sued by the shareholders, which happens."

The Yes Men's point: The heads of major corporations won't suddenly do the right thing even if someone - somehow, somewhere, some day - manages to reveal to them the errors of their ways. Now five years later, Dow blathers on about the importance of clean water even as it does nothing for the residents of Bhopal, who are suffering from a drought. To catch the attention of all those who have forgotten about Bhopal - virtually everyone except the people of Bhopal and a handful of dedicated activists - the Yes Men created B'eau Pal, a critique wrapped in a jest and shrouded in faux-corporate hype.

With their spoofs of the World Bank, fast food restaurants, and Exxon Mobil, the Yes Men are culture jammers par excellence. Their altered advertisements, mock press conferences, and off-kilter conference presentations are delightful inversions of corporate propaganda. They interrupt life's regularly scheduled programming to bring us these important announcements. They treat corporate reality in the same way that hackers approach websites or Marcel Duchamp approached the Mona Lisa.

They are, in other words, the ultimate Lords of Misrule.

During the Middle Ages, at the end of the Christmas holiday, came Twelfth Night, a tradition dating back to the Saturnalia of the Roman age. On this one night, under the guidance of a specially selected Lord of Misrule, the world turned upside down. Men become women, beggars became kings, prostitutes became queens, jesters became judges. In this topsy-turvy world, the community indulged in fantasies and tolerated transgressions. Everyone drank a lot and let off steam. Indeed, because it was more a safety valve than a way of imagining alternative futures, Twelfth Night ultimately reinforced the status quo. Nevertheless, the tradition has spawned satirists, surrealists, and subversives of all varieties.

As the latest Lords of Misrule, the Yes Men aim to change the rules of the game. They're not satisfied with an annual flouting of tradition. They're not interested in turning poisoned water into a high-end beverage as a one-off prank. They want to continually bring the high low and the low high, smothering the corporate elite in their own puffery and amplifying the voices of the victims.

This is deadly serious stuff. But remember: If you can't laugh, don't bother to join their revolution.

Torture and the Bomb

The Yes Men are the mirror image of those infamous No Men, George W. Bush and Dick Cheney. The Yes Men speak truth to power; the No Men spoke lies to the powerless. The president and vice president said no to peace, to international treaties, to economic common sense. When the world protested, they said, "No, we will go our own way." When the U.S. public protested, they replied, "No, history will vindicate us."

This repudiation of moral standards reached its nadir with the torture issue. The Bush administration attempted to create its own moral universe ruled over by a ticking bomb and governed by ruthless expediency. This was not, however, an unprecedented break with tradition, as FPIF contributor Jon Reinsch points out.

"When the United States adopted torture as a weapon in its 'war on terror,' it was a turn to methods that shock the conscience, and when discovered, officials and their media surrogates went to great lengths to gain public acquiescence for their policies," Reinsch writes in Torture and the Bomb. "It was not the first time the country betrayed its highest ideals, nor the first time U.S. citizens were led to deny that any betrayal had occurred. The United States had gone down the same road in 1945, when it used nuclear weapons to destroy two Japanese cities. One case involved the product of intensive scientific research, the other methods dating back hundreds of years, if not to prehistory. But in the way the U.S. government made and justified these fateful decisions, the two stories contain many disturbing parallels."
Posted by Macu at 10/27/2009 04:16:00 PM

I am Israel (Documentary Film)