Will U.S. finally pay reparations for its act of terrorism? by Wayne Madsen

Will U.S. finally pay reparations for its act of terrorism?
by Wayne Madsen
For the people of Cuba, Barbados, Guyana, Trinidad and Tobago, and Venezuela, October 6, 1976 will always be remembered as the day international terrorism paid a deadly call on the Caribbean region. It was on that day that a Cubana airlines DC-8 aircraft was blown out of the sky by a bomb placed on the aircraft by right-wing Cuban exiles. The bombing of the plane, Cubana flight 455, which had just departed from Seawell Airport in Barbados and was en route to Jamaica, killed 73 people, including children. The chief terrorist technician was Luis Posada Carriles, however, the mastermind was the then-director of the Central Intelligence Agency, one George H. W. Bush. Carriles lives today a free man in Miami where he supports a number of right-wing Cubano groups, all of which are closely linked to GOP 2016 presidential hopefuls Marco Rubio and Jeb Bush.

Carriles and three other Cuban exiles, Freddy Lugo, Hernán Ricardo Lozan, and Orlando Bosch, were arrested in Venezuela for bombing the plane. Bosch was acquitted and he moved to Miami where he lived until his death in 2011. Lugo and Lozan received 20 year sentences in Venezuela and Posada Carriles was jailed for eight years prior to his escaping to Florida before his final sentencing hearing. Carriles carried out his acts of terrorism in the Caribbean region from his base in Caracas, where he operated a security company called Investigaciones Comerciales y Industriales C.A. (ICICA). In addition to the CIA, Carriles worked closely with Miami- and Las Vegas-based Jewish mobster Frank "Lefty" Rosenthal.

1976 saw the CIA under then-director George H. W. Bush carry out a number of terrorist acts against Cuba and companies and countries that did business with Havana. Bush's Cuban associates also bombed the offices of British West Indies Airlines in Bridgetown, Barbados, the Guyanese embassy in Port of Spain, Trinidad; the Air Panama office in Colombia, the Iberia office in Costa Rica, and the Venezuelan mission to the UN in New York. They also committed an arson attack on Cuban-supplied fishing equipment in Guyana and assassinated Cuban officials in Mexico and Argentina. Carriles, Bosch, and their associates also planned to bomb Cuban ships in Mexican ports. They actually helped to carry out bombings of a number of hotels in Cuba in 1997, one of which killed an Italian tourist, and were behind the September 21, 1976, car bombing in Washington, DC that killed former Chilean Foreign Minister Orlando Letelier and his American assistant, Ronni Moffitt.

The role of the CIA in the Cubana 455 bombing is detailed in both the confession of Lugo to Dennis Randwar, the Trinidad and Tobago deputy police commissioner, and declassified U.S. Justice Department documents. For years, as governor of Florida and as a "private businessman" linked to CIA drug smuggling and money laundering, Jeb Bush, who arrived in Caracas in a year after the Cubana bombing for a two-year stint as a vice president for the CIA-linked Texas Commerce Bank, protected Posada Carriles and Bosch from answering for their acts of terrorism. During the Iran-contra scandal, Posada Carriles and Bosch assisted Vice President Bush's illegal contra supply operation in Central America. 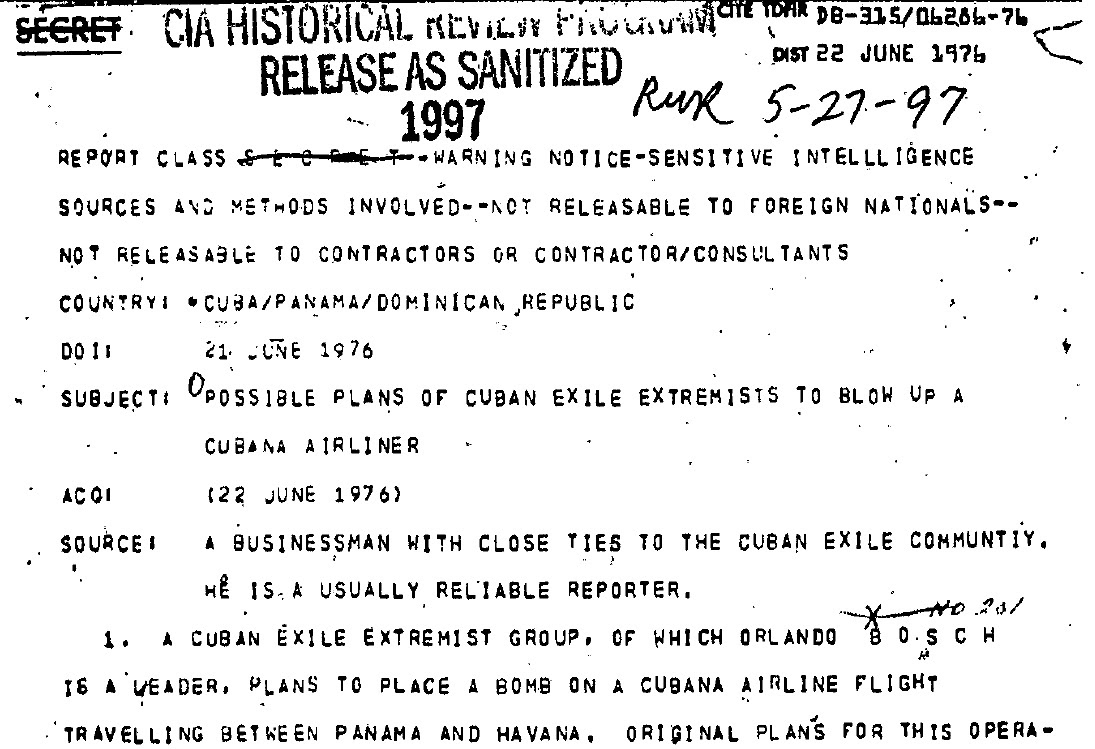 Just as with the 9/11 attacks, for which there were prior warnings, the U.S. took no action to prevent a terrorist attack on a civilian airliner in 1976. And just as with 9/11, the Bush family was up to their eyeballs in both acts of aviation terrorism.

The above FBI memo indicates that the "IC" (U.S. Intelligence Community") was well aware that Posada Carriles and Bosch, both friends of Jeb Bush, "engineered the bombing of the airplane." Jeb Bush later defended both terrorists after they took up permanent residence in Miami.

FBI admits that it maintained contact with Posada Carriles as late as June 1976, well after he had been involved in carrying out terrorist bombings and began planning the bombing of Cubana 455.

Confession to the Trinidad and Tobago police by Ricardo Lozan, Posada Carriles's associate, that he was a member of the CIA. At the time, George H. W. Bush was CIA director and he would have undoubtedly authorized the bombing of Cubana 455.

As the U.S. continues to normalize its relations with Cuba, Posada Carriles, Jeb Bush, George H. W. Bush, and their murderous associates should be required to make an final accounting for their crimes, especially those of 1976, the year the CIA proved that it was never brought under control after the Watergate scandal. Rubio, the son of right-wing Cuban immigrants, has proven by his close and unapologetic association with the terrorist elements that largely make up Florida's Cuban exile community that he requisite "good citizen" credentials -- respect for the rule of law, the U.S. Constitution, and a traditional appreciation for the popular "commonwealth" -- to serve as President of the United States, let alone a U.S. senator.

Cuba, Barbados, Jamaica, Trinidad and Tobago, Guyana, Colombia, Mexico, Costa Rica, Panama, and Venezuela should also require the U.S. to pay full reparations for its repeated acts of terrorism and the costs involved in conducting official investigations of those heinous acts.

According to eastern Ukrainian sources who contacted WMR, the Ukrainian central government in Kiev has been stockpiling cylinders of toxic gas and canisters of other poisonous substances at an electrical plant in Slavyansk, a town in eastern Ukraine that remains occupied by Kiev troops. The Donbas region in eastern Ukraine, populated by mostly ethnic Russians and Russian-speakers, declared independence last year as the People's Republics of Donetsk and Lugansk. The Ukrainian government, aided by neo-Nazi and Israeli mercenaries, as well as "Al Qaeda" and "Islamic State" veterans from Iraq and Syria, have been waging a war against the people of eastern Ukraine with military assistance from the United States and other NATO nations.

A source in Slavyansk reports, "There's chlorine in cylinders, in not less than five covered wagons and also in other containers with contents I know nothing about, labeled with words and signs "poison, "danger," and "do not touch without protection." The source added, "All of it was brought in under the guise of varnishes and paints, but I know the look of the packaging of both, and whatever was brought here last week has got nothing to do with it, it looks like a chemical weapon."

The report from the Donbas region also stated that the intelligence service of the Donetsk People's Republic (DPR) was informed by its sources inside the Ukrainian Security Service that Kiev plans to use the chemical weapons in eastern Ukraine and then blame the eastern Ukrainian separatists. The source with DPR intelligence said, "I think they will follow the suit of the militants in Syria, they [Kiev] will use it against their own soldiers and civilians, and blame us, following which they will invite foreign reporters, show the corpses, raising a worldwide scandal with demand that NATO forces bomb us."

A Ukrainian rail and road transportation industry source confirmed that the suspect canisters spotted in Slavyansk were, in fact, transported asdangerous cargo by the Ukrainian Security Service and Ukrainian military intelligence, with the full cooperation of Kiev and local authorities.

In Syria, Islamic State guerrillas and their allies used sarin and chlorine gas to attack civilians outside of Damascus and then blamed the Syrian government of Bashar al Assad for waging chemical warfare against his own people. The charge that certain governments have resorted to using chemical weapons, known as the "poor man's weapon of mass destruction," has been a favorite neocon propaganda tool employed against targeted leaders, including Assad, Libya's late leader Muammar Qaddafi, Sudanese President Omar al-Bashir, and, possibly soon, the leadership of eastern Ukraine. In all these cases, the story of chemical weapons use was either totally false or was altered to show it was the governments that used the weapons and not U.S.-supported rebels. Assad was accused of using sarin gas on to kill some 1300 civilians near Damascus, including children (above). In fact, it was the Islamist guerrillas that carried out the attack and another in Aleppo that killed 30 civilians. The Israeli media blamed Assad and the international media, pressured as usual by Israel's propaganda machine, blamed Assad. However, the neocon propaganda was so weak, President Obama opted not to commit U.S. forces to fight against Assad's government.

The intelligence chatter from eastern Ukraine indicates that the United States and its allies in Kiev are going to use, once again, a page from the WMD false flag playbook, previously employed in Syria, Libya, Sudan, and Iraq.