McCain told the fake Groysman that he favored sending lethal weapons to Ukraine to fight against Vladimir Putin in eastern Ukraine. McCain also said he sent a letter to President Trump urging increased sanctions against Russia.

The most interesting aspect of the call is McCain's interest in the pranksters warning that Putin ordered the Russian secret service to reveal details of McCain's being "recruited" as a "collaborator" by Russian intelligence during his time as a prisoner-of-war of the North Vietnamese. McCain appears to be genuinely concerned about such a revelation and asks to prankster to keep him informed of further details. McCain asks the prankster to provide further information on the POW story to him through the Ukrainian ambassador in Washington.

At no time during the conversation, does McCain appear to question the veracity of the caller. 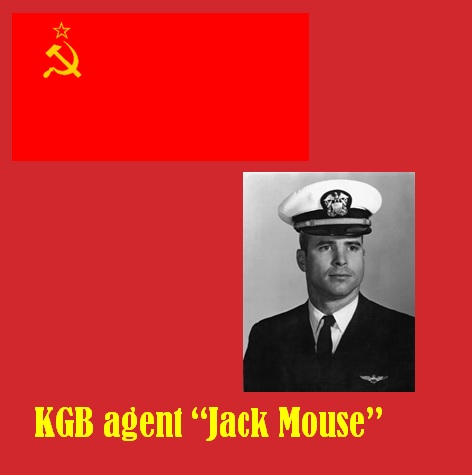 If the long-suppressed story about McCain's special treatment by Soviet intelligence is not true, McCain appears to be awfully interested in a "fake" story. The story about McCain first appeared in the Moscow Post on September 18, 2008. The English version of the story was reportedly taken down after pressure was exerted by American "authorities."

The following is a paid translation of the McCain article from Russian to English and is an exclusive to WMR:

So, as it turned out, McCain has worked for many years in the Soviet secret services, recruited during the Vietnamese captivity (in 1967). The KGB's Senator John McCain had the code name Jack Mouse.
"To him it was a special relationship" - Duet [Hanoi Hilton commandant] says, "the power he had more than other Americans."
"Russian advisers spent many days in conversations with him. What they agreed to do, I do not know. However, once he was specially summoned to my office, where he signed some papers. Soon McCain transferred to a hospital, where Soviet doctors worked. Since then, I have not seen him. "
After that, according to the official biography, this was followed five years later by the Vietnamese prisoner transfer, after which the future congressman was released, in 1973, the result of the Paris agreement.
It is believed that all those years McCain spent in Vietnam. However, as we find out from the The Moscow Post journalists that this story is not quite true.
A former KGB agent, Sergei Nikolaev (name for this article has been specially modified), now lives in a European country, where he moved after the collapse of the Soviet Union.
In the early '70s Nikolaev, he worked for intelligence at Voronezh.
There took place agent training of those not already identified by the West.
Nikolaev remember an American who came to him in winter 1968. He learned that it was McCain, when later often appeared on the TV screen.
"He's passed special training for operations in the United States during a possible war," says Nikolaev.
"He was taught the basics of subversion, disabling communication systems, paralyzing aerodrome operations. McCain had aliases. Therefore, according to the files we called him Jack Mouse. Our wags called him Mickey Mouse. "


Labor pick Acosta part of Epstein-Trump underage sex crime cover-up
By The Wayne Madsen Report
Alexander Acosta, President Trump's pick to replace failed nominee Andrew Puzder as Labor Secretary, has his own political baggage stemming from his actions as U.S. Attorney for Southern Florida in the sweetheart plea deal involving billionaire pederast Jeffrey Epstein. Acosta agreed to a rather unprecedented non-prosecution agreement (NPA) struck with Epstein and his attorneys on October 30, 2007 that saw the federal government waive any future prosecution of Epstein or any of his associates named or unnamed by underage female sexual abuse victims of Epstein. Epstein pleaded guilty to one state of Florida charge of soliciting prostitution from a 14-year old girl.
Although Acosta later mildly criticized the plea deal in an open letter he write in 2011, he did not respond to WMR's request in January 2015 for an interview on the civil case in which four of Epstein's victims sued the U.S. government, claiming that the NPA violated their rights under the Crime Victims' Rights Act. The victims, who are now adults, claimed that the federal government's NPA with Epstein violated the 2004 CVRA. Acosta was clearly aiming to protect Epstein's high-powered friends, including the person who just nominated him as Labor Secretary. Acosta's letter states: "Our judgment in this [Epstein] case, based on the evidence known at the time, was that it was better to have a billionaire serve time in jail, register as a sex offender, and pay his victims restitution than risk a trial with a reduced likelihood of success." Epstein's 13-month "jail time" included the stipulation that he only had to stay in prison in the evening and was free to leave during the day. The Palm Beach Police Department was outraged by Epstein's plea deal.The NPA was signed on behalf of Acosta by A. Marie Villafana, the then-Assistant U.S. Attorney for Southern Florida who later became the U.S. Attorney under Attorney General Eric Holder. The plea deal with Epstein was concluded after the U.S. Attorney's Office in Miami and the FBI investigated Epstein separately from the investigation conducted by the Palm Beach County Police Department and the Florida State Attorney's Office.  The deal cut between Acosta and Villafana and the state of Florida, which was then under the governorship of Republican Governor Charlie Crist and Republican Attorney-General Bill McCollum stated that the federal government would defer to Florida on the prosecution of Epstein. Acosta went on to become the dean of the law school of Florida International University in Miami.
Flight manifests of Epstein's Gulfstream jet and Boeing 727 indicate that Epstein's passengers included a mix of underage sex traffic victims and some of the world's most powerful politicians and businessmen. These include Bill Clinton, Harvard law professor Alan Dershowitz, former Treasury Secretary Larry Summers, Chicago Pritzker family chieftain and Hyatt Hotels executive chairman Thomas Pritzker (the first cousin of President Obama's Commerce Secretary Penny Pritzker), and failed Palm Beach mayoral candidate Gerry Goldsmith. Underage passengers included on the manifest include Virginia Roberts and Cindy Lopez and others listed by their first names: Colleen, Tatianna, Margarita, Carolina, Lisa, Margaret, Dana, Julie, and Jessica. Epstein's two major "procurers" of underage girls are also frequent flyers on Epstein's "Pederast Airlines" -- Ghislaine Maxwell, the daughter of the late publishing tycoon and Mossad asset Robert Maxwell, and Sarah Kellen (now Sarah Kensington), the girlfriend of NASCAR driver Brian Vickers. Up to 40 women were identified as being the victims of sexual abuse by Epstein. Court records indicate the number may be higher with one reference to a Jane Doe 103.

In a later lawsuit filed on September 26, 2016 by another Jane Doe, identified as Katie Johnson, it is alleged that there were three additional underage victims of Epstein -- as well as Donald Trump -- in 1994. They are Jane Doe (Johnson), Joan Doe, and Maria, the latter a 12-year old girl who Jane, Joan, and a third witness, Tiffany Doe, allege may have been "disappeared" by Trump after he sexually assaulted and raped her at the Wexner Mansion in Manhattan.
Epstein pleaded the Fifth Amendment when asked by FBI agents, "Have you ever socialized with Donald Trump in the presence of females under the age of 18?” Epstein also took the Fifth when the FBI asked him: "Have you ever socialized with Bill Clinton in the presence of females under the age of 18?” Fourteen private phone numbers for Trump and members of his family, including his media-shy brother Robert Trump, Robert's wife Blaine Trump, Donald Trump ex-wife Ivana Trump, and Donald Trump's daughter Ivanka Trump, are found in Epstein's address book. 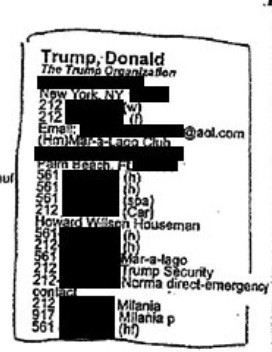 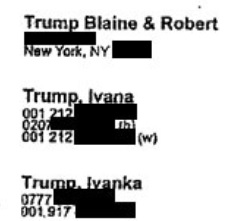 Trump and his family's names and numbers found in pederast Jeffrey Epstein's "black book."
The Senate Labor Committee has an opportunity to ask Acosta about the Epstein plea deal during his confirmation hearing. However, do not expect committee chairman Senator Lamar Alexander (R-TN) to proceed down such a road of inquiry. Alexander's chief of staff, Ryan Loskarn, was arrested at his Washington, DC home in December 13 and found with an entire computer hard disk full of child pornographic videos and photos. Loskarn, who was remanded to his Maryland parents' custody while awaiting arraignment in federal court in Washington, was found hanging in his parents' basement in January 2014. The cause of death was determined, without a full autopsy, to have been suicide.

Controversial white supremacist and neo-Nazi leader Richard Spencer is establishing a major center for his National Policy Institute in Old Town Alexandria, just a free trolley ride and a few subway stops away from the U.S. Congress, White House, and Supreme Court.
Spencer moved his operation, which includes a publishing house and a periodical, from Whitefish, Montana to Alexandria after the election of Donald Trump. In mid-November 2016, Spencer and 300 of his neo-Nazi followers met at a raucous meeting in the Ronald Reagan Building, just a few blocks from the White House, where the successor to American Nazi leader George Lincoln Rockwell led the crowd to shouts of "Heil Trump!"
Spencer and his Nazis have been met with hostility from Alexandria's town folk, who have engaged in protests on the second and fourth Sundays of every month outside of his rented $3000 a month two-floor residence and office at 1001 King Street at the corner of Patrick Street. Spencer is located above a shop that makes its own chocolates but the presence of the Nazis upstairs has not deterred customers of the chocolatier from patronizing one of their favorite stores. In fact, on Valentine's Day, the biggest sales day for chocolate sales, BluPrint Chocolatiers completely sold out of their home made products. Customers who dropped by only to be disappointed that the store closed earlier expressed dismay over the presence of Spencer and his operation on the second and third floors of the building. 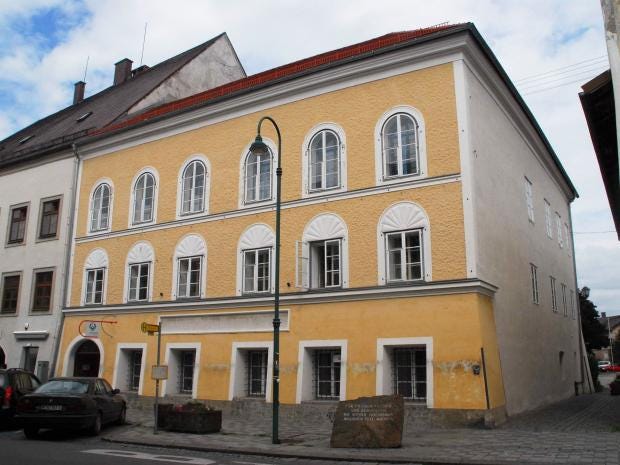 It's pretty clear why Spencer's neo-Nazis chose the building [left] for their headquarters. Unlike the standard red brick colonial buildings in Old Town, their structure is vaguely reminiscent of the apartment building in Linz, Austria [right], where Adolf Hitler was born. There are plans to raze the Linz building.
On Valentine's Day evening, about three dozen anti-Nazi protesters, led by those who support designating Alexandria a "sanctuary city" gathered in front of the Alexandria City Hall where they planned to fill the city council meeting taking place. Many of the protesters were unaware of Spencer's close links to Trump's senior policy adviser Stephen Miller, a fellow member of the Duke University Conservative Union in 2006 and 2007. Although Miller is Jewish, he shares many of Spencer's beliefs, especially his anti-immigrant fervor. Miller is the chief architect of Trump's anti-Muslim immigration ban, now suspended by several federal court decisions. 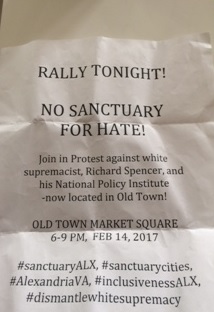 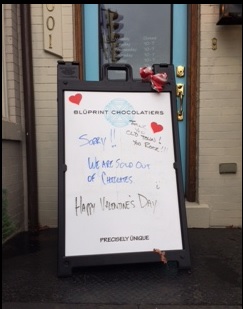