The Saudi government's support for "Al Qaeda" and its spin-offs is, once again, running at full capacity. In a little-publicized report from the Middle East, the Saudi government has been emptying its prisons of death row inmates, some jailed for drug smuggling and rape in the kingdom and destined for a beheading in Riyadh's infamous "Chop Chop Square," in return for their joining the "Jihad" in Syria. The Saudis held the families of the prisoners as hostages to ensure the released prisoners went to Syria to fight Assad.

According to a report by the Assyrian International News Agency (AINA), the Saudi Interior Ministry commuted the death sentences of several inmates in return for their going to Syria to fight against the government of President Bashar al-Assad. The CIA and Britain's MI-6 has been providing intelligence, weapons, and training to Jihadists, who have also been supplemented by Jihadists from Libya, armed by the CIA in the overthrow of Muammar Qaddafi. Shortly before his suspicious death in Scotland in 2005, former British Foreign Secretary Robin Cook wrote in The Guardian that "Al Qaeda" was a CIA database of mercenaries, financiers, and interlocutors used by the CIA to fight the Soviets in Afghanistan: "Throughout the 80s he [Osama bin Laden] was armed by the CIA and funded by the Saudis to wage jihad against the Russian occupation of Afghanistan. Al-Qaida, literally 'the database,' was originally the computer file of the thousands of mujahideen who were recruited and trained with help from the CIA to defeat the Russians."

It now appears that Al Qaeda and its spin-off Al Qaeda in the Islamic Maghreb (AQIM) have been revived to target not the Soviet Union, which ceased to exist in 1991, but former Soviet-supported Arab socialist governments throughout the Middle East: Iraq, Egypt, Tunisia, Libya, South Yemen, Syria, and lastly, Algeria. In her testimony before Congress, Secretary of State Hillary Clinton, for the first time, admitted that the attack on the BP-Statoil-Sonatrach natural gas facility in Algeria involved Jihadists from Libya. These same Jihadists were involved in the September 11, 2012 attack on the U.S. diplomatic facility in Benghazi, in which four Americans, including U.S. ambassador Christopher Stevens, were killed. The recent attack on the Algerian facility killed three Americans. A total of seven Americans, as well as foreigners and tens of thousands of Syrians and Libyans, have been killed as a result of the CIA and MI-6 operation to revitalize "Al Qaeda" as an effective fighting force in the Middle East. The CIA's support for Saudi Arabia's program to breathe new life into Al Qaeda goes a long way into explaining the secrecy surrounding the attack on the Benghazi compound and the gas plant in Algeria. Rather than pound Mrs. Clinton with questions about Benghazi, skeptical congressmen should hold their fire for incoming CIA chief John O. Brennan, President Obama's national security confidante and clandestine services veteran of the CIA. What did Brennan know about the Saudi program to supplement Al Qaeda forces in Syria and Libya and when did he know it?

The Al Qaeda presence in North Africa is being used to justify a massive buildup of U.S. military forces from Mauritania to Somalia.

The prisoners released from Saudi jails to fight in Syria against Assad, as well as to Libya to fight Qaddafi and Iraq to fight the Sh'ia government of Nouri al-Maliki, included Saudi nationals, as well as Iraqis, Yemenis, Palestinians, Sudanese, Jordanians, Afghanis, Syrians, Egyptians, Kuwaitis, Pakistanis, and Somalis.

This is not the first time that the Saudi Interior Ministry has been directly linked to Al Qaeda. On April 21, 2006, WMR reported: "Saudi informers have revealed that Al Qaeda members routinely traveled through Riyadh on their way to Pakistan and then to Taliban Afghanistan. These insiders report that Salman's [Governor of Riyadh Province Prince Salman] office arranged for cash payments, hotels, and air fares for the Al Qaeda members." Salman is now the Crown Prince, heir to the Saudi throne and Minister of Defense.

The authenticity of the Top Secret Saudi document [below] has been verified unofficially by the Saudi government and also by the governments of Yemen and Russia. 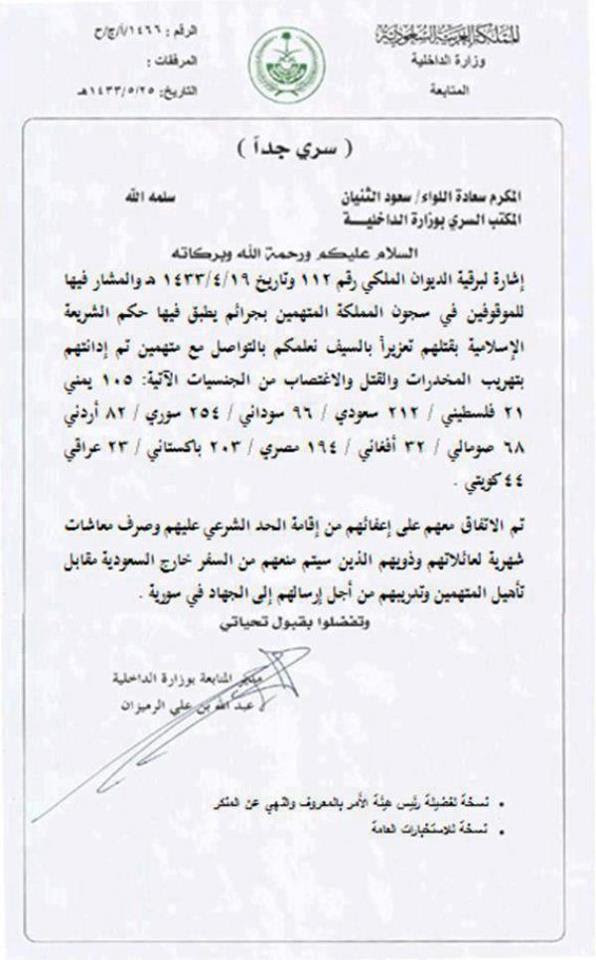 
This is not the first time a classified document has pointed to the Saudi Interior Ministry as covering for drug dealers. When a Saudi Prince named Nayif was caught trafficking in cocaine in 1999, the Saudi Interior Ministry informed Paris in 2000 that if France brought criminal charges against Nayif, a lucrative $7 billion radar defense contract, Project SBGDP (Garde Frontiere), with the French firm Thales would be canceled. The details are found in the confidential French diplomatic cable obtained by WMR [below]. The cocaine trafficked by Nayif was being used to fund Al Qaeda in Afghanistan and the cash paid to terrorist recruits passing through Riyadh was paid by the Interior Ministry from the drug proceeds coffers. The CIA was aware of and encouraged the off-the-books payments to the Al Qaeda recruits, just as it is doing today with the Al Qaeda recruits being emptied from Saudi prisons and paid by Saudi government interlocutors. 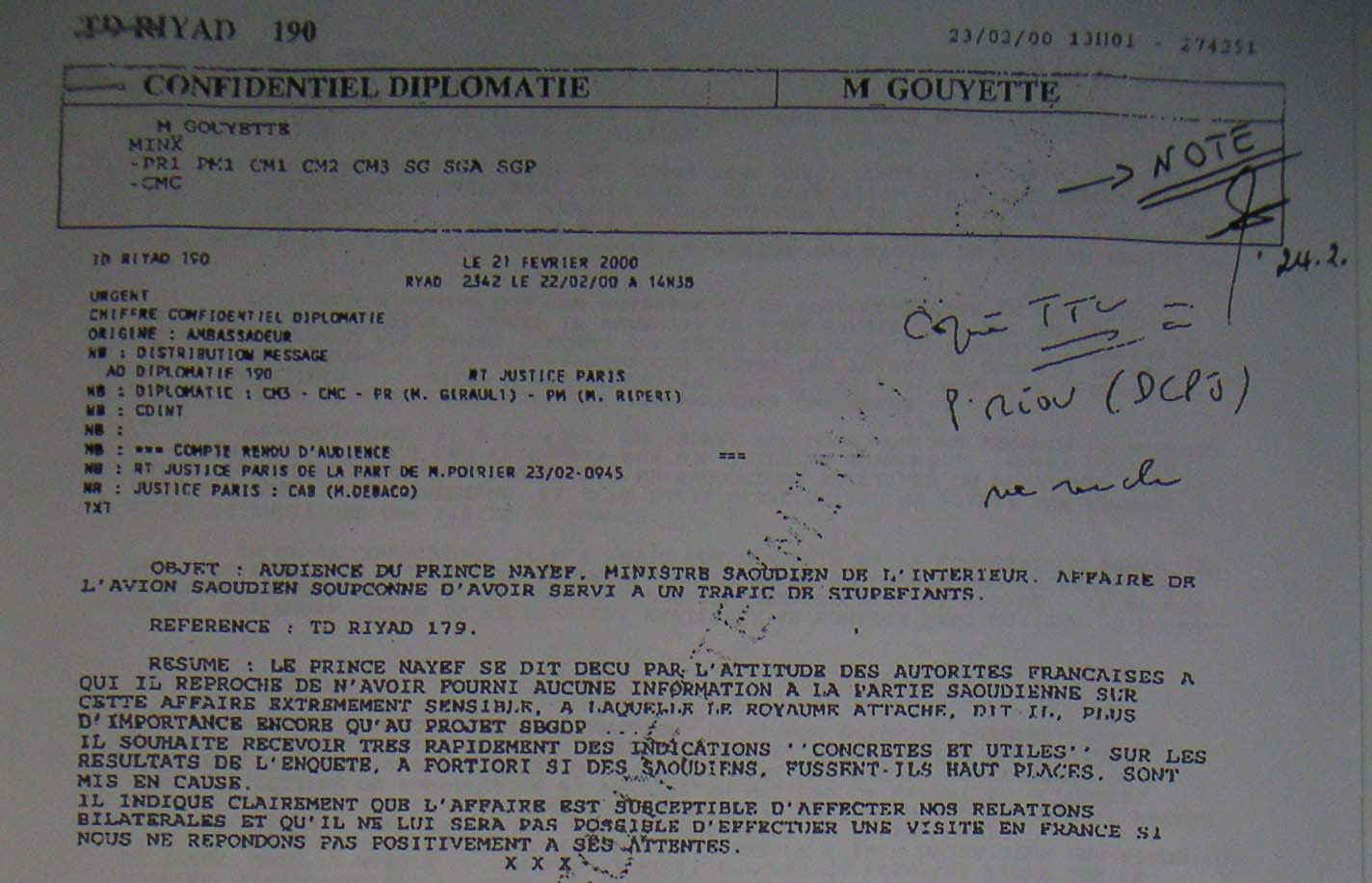