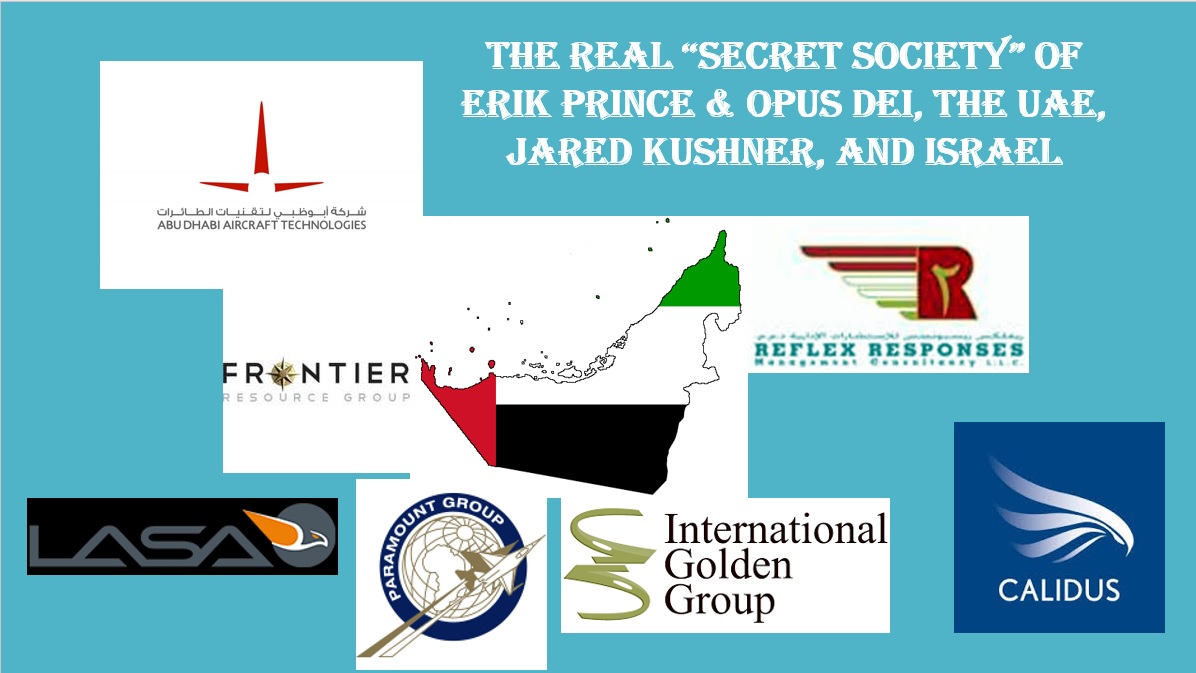 Amid nonsensical claims by congressional Republicans, including Senator Ron Johnson (R-WI) and Representatives Rep. Trey Gowdy (R-SC), Matt Gaetz (R-FL), and John Ratcliffe (R-TX), that the Federal Bureau of Investigation is hosting a "secret society" intent on ousting Donald Trump from the presidency comes word from our Middle East sources that the founder of the infamous Blackwater mercenary firm, Erik Prince, is creating a secret army in the Middle East with strong links to the secret fascist Roman Catholic sect, the Opus Dei. Prince runs a number of private military firms based in the Sheikh Zayed Military City, located outside of Abu Dhabi, the capital of the United Arab Emirates, and in nearby Dubai, the UAE's financial hub.

Opus Dei was founded in Spain in 1928 by Catholic priest Josemaria Escriva, canonized in 2002 by Pope John Paul II as a saint. This "patron saint" of fascism was a major supporter of Spanish dictator Francisco Franco. Escriva justified countless war crimes committed by Spanish fascist forces in the civil war waged against Spain's Loyalist supporters and international volunteers who came to their assistance. Today, Opus Dei is waging a covert battle against Pope Francis I, the first pontiff from Catholicism's Jesuit order and an opponent of the policies of Trump.

Prince sold Blackwater in 2011 and moved to the UAE where, with the financial backing of Abu Dhabi Crown Prince Mohammed bin Zayed al Nahyan (MBZ), he established a new network of mercenary entities. These include Reflex Responses (R2) and Frontier Resources Group (FRG). FRG, which is based in Hong Kong, is also involved in energy resources and rare earth mineral exploitation and receiving Chinese investments, along with financial largesse from MBZ. Prince's firms have become influential in the UAE and other Middle Eastern countries due to the fact that his major patron, MBZ, is also the deputy Supreme Commander of the UAE Armed Forces, a close friend and ally of Saudi Arabia's emerging strong man, Crown Prince Mohammed bin Salman al Saud (MBS).
R2 personnel, many recruits from military units in Colombia, Chile, El Salvador, and South Africa with blemished records of committing human rights abuses, are active in supporting UAE and Saudi forces in Yemen's bloody civil war. R2 has also reportedly hired Baathist military personnel in Iraq, who were once loyal to Saddam Hussein.

Prince is also believed to be instrumental in the creation of a domestic UAE armaments industry, which is not bound by international regimes and domestic laws prohibiting the export of war materiel to countries subject to international sanctions. Abu Dhabi Aircraft Technologies (ADAT) and Calidus LLC, are reportedly jointly manufacturing UAE versions of the Brazilian B-250 Bader turboprop and the Embraer 312 Tucano, both highly-prized for counter-insurgency operations. Prince's operations in the UAE have also been involved in transforming light aircraft used for agricultural operations into armed surveillance and counter-insurgency aircraft. This has been accomplished by a deal between Prince and LASA Engineering Ltd. of Bulgaria. LASA stands for "Light Armed Surveillance Aircraft." The Trump administration, which has called for the tightening of international sanctions on arms exports to Iran, Syria, Venezuela, Cuba, and North Korea, is turning a blind eye to Prince's and the UAE's sanctions-evading operations in Abu Dhabi.

Another Prince firm, Phoenix Aviation Malta Limited, is believed to be involved in Libya's civil war. Its parent, Phoenix Aviation Ltd., based at Wilson Airport in Nairobi, Kenya, is involved in various African civil wars, including those in Somalia and South Sudan. Prince has forged a cooperative agreement with Ivor Ichkowitz, the chairman of South Africa's Paramount Group, a military equipment manufacturer, to market the firm's armored military vehicles in Abu Dhabi in cooperation with the UAE firm, International Golden Group. Ichkowitz is close to the scandal-plagued presidents of South Africa and Kazakhstan, Jacob Zuma and Nursultan Nazarbayev, respectively. Trump recently hosted at the White House Nazarbayev, whose vast interwoven network of offshore companies have funneled suspected embezzled Kazakhstan funds into Trump's own network of shell corporations.

Together with MBZ and MBS, Prince is also helping to carry out the new "strategy" for the Middle East crafted by Trump's son-in-law and Middle East special envoy Jared Kushner and Israeli Prime Minister Binyamin Netanyahu's government. Kushner has personally hammered out the new strategy during all-night sessions with MBS in Riyadh. Prince has added influence with the Trump administration through his sister, Betsy De Vos, Trump's Secretary of Education. De Vos is a covert from the Dutch Reformed Church to Mormonism. She is the wife of Amway co-founder Dick DeVos. Erik Prince converted from Dutch Reformed to Roman Catholicism at the same time he joined Opus Dei. Prince and Betsy De Vos are both heirs to an automobile parts corporate fortune created by their right-wing industrialist father, Edgard Prince.

Prince was a major supporter of Trump's 2016 presidential campaign. On January 11, 2017, a little over a week from Trump's inauguration, Prince and MBZ arranged a clandestine meeting with a Russian government envoy in Seychelles. Prince, representing the Trump transition team, offered Russia a deal that would have seen Russia curtail its support for Syria and Iran in exchange for a lessening of Western sanctions against Russia. The previous month, MBZ met with key Trump transition figures, including Kushner and Stephen Bannon in New York. The Seychelles and Manhattan meetings, as well as the Trump-Kazakhstan connection, are among many issues being investigated by Justice Department Special Counsel Robert Mueller and his team of prosecutors and FBI agents.
Posted by Macu at 1/25/2018 12:20:00 PM


Trump’s multiple sex scandals endanger U.S. national security
By Andrew Kreig and Wayne Madsen
Recent claims that Donald Trump paid hush money before the 2016 election to porn star Stormy Daniels to cover up a 2006 affair underscore far more sinister events.
Such a payoff would show not simply Trump’s low morals and high arrogance —but also his propensity for outright crime.
These grim possibilities are especially relevant to our recent exposé “Welcome to Waterbury,” which drew on 2016 lawsuit allegations that Trump and his billionaire friend Jeffrey Epstein in 1993 raped “Maria,” age 12, and “Jane Doe,” age 13, also known as Katie Johnson, in a New York City luxury townhouse then being used by Epstein. Details are here in the Wayne Madsen Report and the Justice Integrity Project (JIP, http://ow.ly/v4qd30hGcVC).
Today, we compare those claims by underage girls with the ones by Stormy Daniels, as reported by In Touch magazine in column last week based on her recollections years ago of sleeping with Trump. Insight published the material to follow up the Wall Street Journal’s report that Daniels received $130,000 shortly before the 2016 election from Trump attorney Michael Cohen.
Cohen and Daniels (born Stephanie Clifford) have denied an affair or hush money. More generally, Trump and his representatives have issued blanket denials against all those nearly 20 women who have alleged sexual harassment or assault. “They’re all lying” Trump famously said during the 2016 campaign about his accusers, who then numbered about a doz 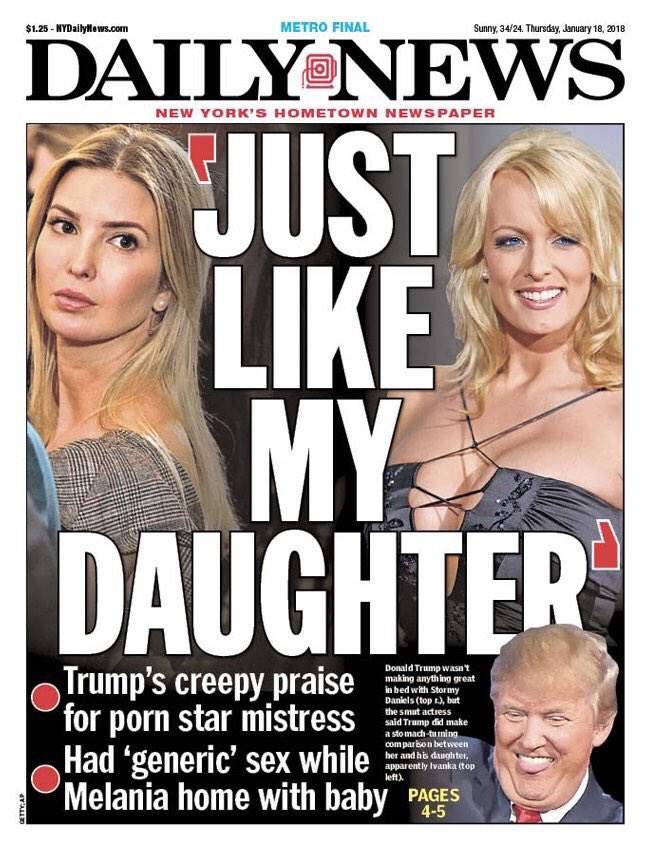 en victims.
To explore this further, we examine more closely the Daniels and Maria/Jane Doe stories.
In each instance, Trump allegedly used his celebrity status (much like he described in the “Access Hollywood” tape that surfaced during the presidential campaign) to do what he wanted. The stories demonstrate that Trump has an established system whereby his minions can threaten and/or bribe his targets to cover up crimes or infidelity.
Another commonality in the accounts are two biggies:  One is the utter immorality of each scandal, which should concern any decent observer and not just the evangelicals and other “family values” proponents he currently courts. Another similarity is the pure recklessness of the alleged behavior. Any activity with underage girls is supposedly harshly punished by the legal system. And relations by a married new father with a porn star, while not illegal, would be less than prudent.
Any activity with underage girls, as alleged in the Katie Johnson lawsuits, would place Trump in a highly- blackmailable position. The fact that the blackmailing of the President of the United States is the most-prized gem for any foreign intelligence agency, the sex scandals surrounding Trump place the national security of the United States in extremis.

Why was MSNBC reporter inside Hawaii emergency center just before missile warning was sent?

Why was MSNBC reporter inside Hawaii emergency center just before missile warning was sent?
By The Wayne Madsen Report
What was an MSNBC reporter, who is normally based in New York and Los Angeles, doing at the Hawaii Emergency Management Agency just hours before "mistake" was made in transmitting missile alert warning? Jacob Soboroff has close links to Israel and the Los Angeles Police Department.