U.S. President Trump announced today a change in the official U.S. view of the city of Jerusalem in Palestine:

This is not Trump's lone doing. The position has long had support of both parties in Congress:

The Senate’s top Democrat, Minority Leader Chuck Schumer, told THE WEEKLY STANDARD Tuesday that he had advised Trump to declare Jerusalem as Israel’s “undivided” capital.
...
A 1995 law declares that Jerusalem should “remain an undivided city” and “be recognized as the capital of the State of Israel,” but allows the president to issue waivers every six months delaying the move of the embassy for national security reasons. The Senate reaffirmed that law in June.
...
Maryland senator Ben Cardin, the top Democrat on the Foreign Relations Committee, reiterated his support for recognizing Jerusalem when asked Monday about the president’s potential announcement.

“I believe that Jerusalem is the capital of Israel, so to me, that’s not news,” he told TWS.

In 2008 then presidential candidate Obama pandered to the Zionist Lobby in the U.S.:

Jerusalem will remain the capital of Israel and it must remain undivided.

Obama though left it at that speech and never made it official policy. Officially declaring Jerusalem an "undivided city" and capital of the Zionist entity means that there is no room for a Palestinian capital in east-Jerusalem. It buries the (fairy-)tale of a sovereign Palestinian state.
But that idea had been dead all along. The only reasons for U.S. presidents to circumvent the 22 year old law by issuing waivers was to pretend that the U.S. would be a neutral broker towards some peace between the (east-)European colonists and Palestinians. That was from start to end a deception. Congress and U.S. presidents are under control of the Zionist Lobby which can marshal enormous amounts of money to make or defeat candidates for legislative or executive offices. The Zionist billionaire Sheldon Adelson, who also sponsors the fascist Israel Prime Minister Netanyahoo, donated more then $100 million to the Trump campaign and tens of millions to Congress races. Today was time for Trump to settle some of that debt.
With the increasing buildup of Zionist settlements in the Palestinian West Bank areas under Netanyahoo, the two state solution had long been killed. The Palestinian dictator Mahmoud Abbas, who let this happen without resistance, is just a kapo used by the Israelis to keep the Palestinians down. The Palestinians in Gaza which defied the Zionist occupation were bombed whenever an Israeli Premier needed some diversion from domestic political trouble.
The U.S. is alone in its move. The global consensus and international legal status is that the issue of Jerusalem must be decided through negotiations. A city divided into of two capitals is the most expected outcome. The EU nations and other countries rejected the move. The Pope and other dignitaries spoke out against it.
The Trump declaration only reveals the true long-standing U.S. position but it still matters. It provides without doubt that the U.S. is the enemy of the people on the Middle East. It exposes those Arab rulers that seek to ally with the U.S. It elevates all those who have been fighting the U.S. all along.
The tyrant of Saudi Arabia and his clown prince son have agreed to Trumps move. Instead of declaring retaliatory measures they only issued pro-forma condemnations. Other Arab rulers which depend on Saudi money, like the Jordan King "Playstation" Abdullah, will likewise stay mostly quiet.
There will likely be only little violence in the immediate aftermath of the Trump declaration. The long term effects though will be significant. The Arab public, which gets little coverage in the "western" press, is seething. Professor Assad AbuKhalil reports:

This in Saudi Arabia
Hashtag "Jerusalem is the capital of Palestine" #1 trending right now in #KSA #Saudi #القدس_عاصمه_فلسطين_الابديه
PS It also is in Iraq and Algeria.
PS and in Syria.

This is today's front page of the Beirut Daily Star, a newspaper which is on most issues solidly in the "western" camp. 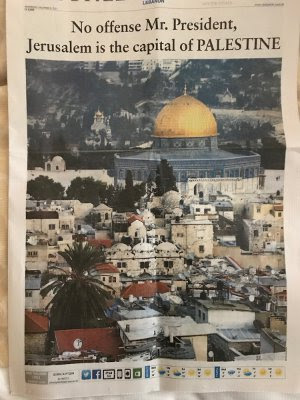 bigger
The Professor Amal Saad of the Lebanon University predicts:

Amal Saad @amalsaad_lb - 6:29 PM - 6 Dec 2017Trump has no idea how his declaration will backfire. In violating Int'l law & legitimizing Israel's apartheid rule in Jerusalem, Int'l law will no longer serve as a framework for securing Palestinian rights- "from river to sea Palestine will be free" will be normalized discourse

Those parties that have resisted and continue to resist U.S. hegemony and the Zionists, will win in the public opinion of the Middle East. Those who cooperate with and enable the U.S. and its Zionist pendant will lose.
On the winning side are Iran, Syria, Hizbullah and Hamas (one can now also include the Houthi?) They have all long resisted imperialism despite enormous pressure and furious wars waged against them. Trump's move fits neatly into their narrative that the U.S. always was and continues to be an enemy of people of the Middle East. The public support for them will grow.
The other "winners" are the terrorists group which pretend to be against the U.S. and the Zionists but which have done little to fight them. These are al-Qaeda, ISIS and other Wahhabi/Takfiri groups. They use the issue as a recruiting tool but their paymasters keep them away from fighting the declared enemies.
Trump's move will increase the internal instability of those countries U.S. imperialism in the Middle East depends on. The Gulf States are the most endangered. Their pliant leaders will come under increased pressure from their own people. At some point that pressure will violently relief itself. I find it likely that the U.S. will be the first to be hurt by it.