THE ROVING EYE Crimea and Western 'values' By Pepe Escobar

It would not be entirely correct to refer to former Carter administration National Security Adviser Zbigniew Brzezinski as a "neo-con." Brzezinski, a nationalist Polish-American Catholic has earned successive rebukes from the hard core neo-cons for his perceived "anti-Israel" bias. However, when it comes to Russia, there is little difference between the rabidly anti-Russian Brzezinski, who sees Eurasia as a massive chess board, and his erstwhile neo-con colleagues of the "AIPAC persuasion."

Brzezinski has offered both the Obama administration and the coup leaders in Kiev advice on how to limit Russian influence in Ukraine while punishing Moscow for its move to take control of majority-Russian Crimea from Ukraine. One of the reasons why President Obama's academic records from Columbia University have been sealed is a strong belief that Obama participated in Brzezinski's high-level Soviet policy graduate-level classes before the future president joined Business International Corporation, a CIA front that sent journalists and economists under cover to eastern Europe and the Soviet Union to collect intelligence.

Brzezinski's 1998 book, The Grand Chessboard: American Primacy and Its Geostrategic Imperatives, sees Eurasia as a natural expansion zone for American influence. Brzezinski is a promoter of Halfrod Mackinder's "Heartland" theory, which postulates that any country that controls the Eurasian landmass, controls the world.

Mackinder wrote in 1919, "Who rules East Europe commands the Heartland; who rules the Heartland commands the World-Island; who rules the World-Island controls the world." Mackinder's theory was at the heart of the desire of the Third Reich, Imperial Japan, and the Soviet Union to dominate the Heartland. Brzezinski and the more Zionist-leaning neo-cons have adopted the Heartland theory as key to the plan to have the United States dominate the world in the 21st century. However, there have been a number of stumbling blocks, including Ukraine's former close ties with Russia, the embryonic "Eurasian Union" of Russia and the central Asian "stans," and the Shnghahi Cooperation Organization "counter-NATO" alliance of the Russian Federation and People's Republic of China.

Brzezinski has referred to the Ukrainian junta that seized power in a coup, the "new Ukrainian democracy." Ukraine today is no more a democracy than Georgia was after a coup placed Mikheil Saakashvili, a Brzezinski and Soros acolyte, in the presidential palace in Tbilisi. Georgia immediately began threatening the autonomy of pro-Russian Abkhazians and South Ossetians, prompting Russia to deploy protective forces to the two Georgian autonomous republics. Russia's similar deployment of troops to protect the Russian majority in the Crimean autonomous republic of Ukraine is a further carrying out of the Putin Doctrine, which calls for Russia to protect ethnic Russians and other pro-Russian ethnic groups like the Abkhaz and South Ossetians in Russia's "Near Abroad" from the machinations of Western-installed nationalist and anti-Russian regimes.

Not coincidentally, the same day the coup leaders took over power in Kiev, February 22, the Financial Times, which is owned by the Pearson Group, the same company that controls The Economist Group, which absorbed Obama's old Business International Corporation employer in 1986, ran a Brzezinski article titled "Russia Needs to be Offered a ‘Finland Option’ for Ukraine." In the article, Brzezinski says that Ukraine must be absorbed into the European Union as quickly as possible and that Putin's idea of a Eurasian Union must be deterred at all levels, including economically and politically.

Although Brzezinski wants to assuage Russia by calling for the "Finlandization" of Ukraine, in other words, no NATO membership for Ukraine but no division of Ukraine and "mutual respect" between Moscow and Kiev, it is well known that the Finland model no longer applies in Europe. Today, Finland is, for all practical purposes, a de facto member of NATO, with its forces constantly participating in NATO exercises. In addition, it is well known to Brzezinski that during the Cold War, Finnish intelligence covertly cooperated with both the CIA and the U.S. National Security Agency (NSA).

What Brzezinski actually sees for eastern Europe is not "Finlandization" of Ukraine but "Balkanization" of Russia, similar to what NATO accomplished when it divided Yugoslavia into seven separate republics, including one that never had any basis for independence, Kosovo. Crimea, South Ossetia, and Abkhazia have more legal grounds for independence than does Kosovo, an Albanian region of Serbia, governed by mafiosi smugglers and carved out by NATO to ensure a continued military presence for the U.S. and its allies in the Balkans.

Some members of the Ukrainian coup government, including the newSecretary of the National Security and Defense Council Andriy Parubiy, have made common cause with Chechen and other Islamist guerrillas inside Russia. Their goals are the same of those of Brzezinski: the eventual carving up of the Russian Federation into a more easily manageable group of smaller states controlled by the European Union and NATO. 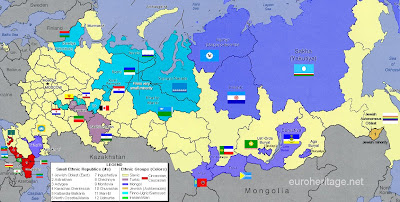 The Brzezinski-neocon plan: A "Balkanized" Russia consisting of as many as 80 mini-states.

The early plans for the then-Soviet Union can be seen in a propaganda pamphlet discovered in the CIA's archives from 1968. The pamphlet, produced by Hungarian anti-Soviet emigres in New York, states what CIA-supported eastern Europe nationalists, the fathers of the neo-Nazis now controlling part of the Ukraniian government, had in store for what was described as the Soviet "Paradise of the Workers":

The Hungarian expatriate monograph states: "Some names appear twice, since those peoples lived in European as well as Asian territory. Also, because some of them were liberated then subjugated again." As evidence that the new leadership in Ukraine is in lockstep with the ilk who penned the aforementioned tract are statements from the new chief of the Ukrainian Security Service, Valentin Nalivaychenko, that refer to his neo-Nazi followers' plans to "liberate" historical Ukrainian lands in the Kuban region , which lies east of the Sea of Azov in the Russian motherland.

It is interesting that the CIA, in promoting certain Hungarian exile groups, was giving assistance to other beliefs from right-wing eastern European emigres, including hatred for the Kennedy family. The authors of the above monograph, published on September 1, 1968, three months after Robert F. Kennedy's assassination, criticized the "glorification" of the "Kennedy clan." Today Caroline Kennedy serves as Obama's ambassador to Tokyo, representing a State Department that has made common cause with the sons and grandsons of those who took pleasure in the assassinations of her father and uncle.