Something is rotten in Whitefish, Montana By The Wayne Madsen Report


Something is rotten in Whitefish, Montana By The Wayne Madsen Report
Federal government sources have told WMR that there is a close relationship between Interior Secretary Ryan Zinke; Zinke's wife Lolita ("Lola") Hand Zinke [both pictured right]; and Whitefish Energy owner Andy Techmanski. Secretary Zinke is a native of Whitefish and his neighbor and family friend Techmanski, also a resident of 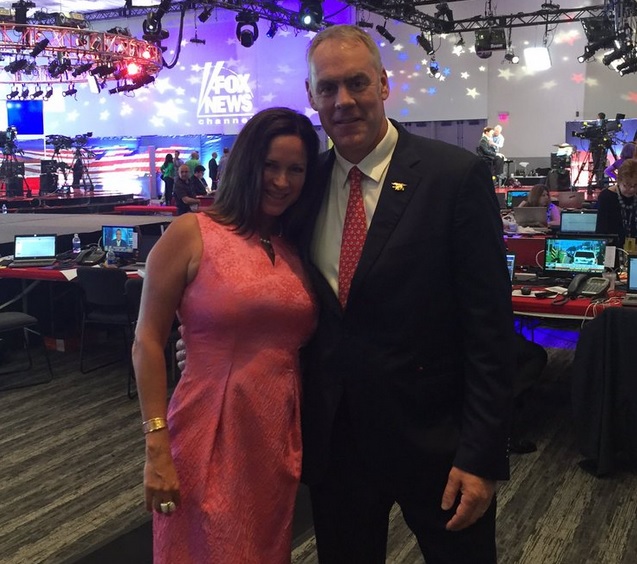 Whitefish, received a $300 million no-bid contract from the Puerto Rico Electric Power Authority (PREPA) to repair the electrical grid of Puerto Rico that was virtually wiped out by Hurricane Maria. The day Maria struck Puerto Rico,

Whitefish Energy had just two employees and during this past summer, Zinke's son worked at one of Techmanski's construction sites in Montana. Our sources report that Mrs. Zinke was the main intermediary between Techmanski [pictured left] and her husband in steering the PREPA contract to Whitefish Energy.

San Juan Mayor Carmen Yulin Cruz said the Whitefish Energy contract "should be voided right away, and a proper process which is clear, transparent, legal, moral and ethical should take place."

After Maria dealt a major blow to Puerto Rico's infrastructure, Whitefish Energy, almost overnight, picked up two Dallas investment groups as significant financial backers. One of the firms reportedly is closely tied to former president George H. W. Bush. Mrs. Zinke is the daughter of former U.S. Consul in Peru Consuelo Castro Hand, a Peruvian naturalized U.S. citizen, and Santa Barbara businessman Frederick Hand. She also claims a direct family relationship to World War II Navy Admiral William "Bull" Halsey. Mrs. Zinke's claim about her mother is peculiar because Zinke claims that her mother was the "U.S. Consulate" in Peru during the Eisenhower administration. The consular corps is composed of either Consul-Generals or Consuls. Consulates are the physical buildings housing consular offices. Secretary Zinke is a former Navy SEAL who was drummed out of the Navy in an early retirement for submitting fraudulent travel claims.

WMR has also learned that during the time Secretary Zinke served as a Montana State Senator and U.S. Representative, his actual residence was a home in Hope Ranch Park, a gated community outside of Santa Barbara, California. In May 2014, the home owners' association of Hope Ranch Park complained after Zinke posted his Montana U.S. House campaign posters in the community. Zinke rarely visited Whitefish or anywhere else in Montana, even though he purportedly represented his state district in Helena and an At-Large congressional district in Washington, DC. In 2013, Zinke listed his address as 735 State Street in Santa Barbara. The address was used on Zinke's Securities and Exchange Commission filing as a director for Save the World Air, Inc., a dodgy Australian-owned and Reno-based company that changed its name in 2015 to QS Energy, Inc. Zinke has come under fire for charging the taxpayers for private charter flights in the United States and abroad that were billed as "official" Interior Department business.

We have also been told by federal sources that Mrs. Zinke and Zinke's two sons, Wolfgang and Konrad Zinke were

friends of former Whitefish resident Richard Spencer, the neo-Nazi leader who moved to the Washington, DC area after Donald Trump's election. Lolita Zinke served as a Hispanic outreach campaigner for Donald Trump  [both, pictured left]. Spencer is a college friend of Trump's adviser and speech writer Stephen Miller. Spencer previously lived at his parents' multi-use residence in Whitefish that also served as the national headquarters for his neo-Nazi National Policy Institute and its related publications. Whitefish has also been at the center of a number of anti-Semitic incidents aimed at the town's small Jewish population. After Trump's election, Richard Spencer moved his headquarters to Alexandria, Virginia in order to be closer to Trump administration officials, said to include not only Miller but the Zinke family.

After marrying Zinke in 1992, Lolita Zinke worked as a civilian intelligence aide to Navy Admiral Mike Boorda, who was the Commander-in-Chief of U.S. Naval Forces Europe (CINCUSNAVEUR) in London. Ryan Zinke worked as a plans officer for Admiral Boorda. Boorda became Chief of Naval Operations in 1994. In 1993, Zinke transferred to Naval Special Warfare Development Group (NSWDG) in Dam Neck, Virginia shortly before Boorda took command of the Navy in Washington. WMR has learned from government sources that Lolita Zinke continued to work for Boorda while he was the CNO. In later biographies, Mrs. Zinke claims that she was merely a "civilian quality control specialist" for the Navy in London. However, quality control specialists normally do not require a Top Secret clearance, which Mrs. Zinke claims she possessed while working in London.

Mrs. Zinke also claims to have worked as an "undercover operative with the California Department of Motor Vehicles in San Diego." She provided no further details of what that job entailed.

On March 29, 2010, WMR reported on the actual circumstances behind the May 16, 1996  suicide of Boorda at his residence at the Washington Navy Yard. That report follows:

"According to a colleague of the late military affairs journalist and one of the most highly decorated members of the U.S. military, Colonel David Hackworth, Boorda's reason for committing suicide -- pushed by the corporate media

and the U.S. Navy -- namely, his unauthorized wearing of two combat "V" (valor) devices on his Navy Achievement and Navy Commendation medals for service in Vietnam -- was false. Boorda reportedly took his own life by a self-inflicted shot gun blast at the CNO's residence at the Washington Navy Yard.

WMR's source reports that Boorda committed suicide because Secretary of the Navy John Dalton had discovered that Boorda, who was married at the time, was carrying on an extramarital affair with a female civilian who worked in the office of the CNO. Dalton reportedly informed Boorda that he would involuntarily retired within a few months of the discovery by the Navy Secretary of the affair.
WMR has also learned that Boorda wrote two suicide notes -- one to his family and the other to Navy personnel. Neither of the notes were ever publicly released by the Navy.

In addition, the Awards and Decorations officer for the Secretary of the Navy informed Boorda that he was not entitled to wear either of the 'V' devices. However, former CNO Admiral Elmo Zumwalt, Boorda's commander in Vietnam, later stated that Boorda was entitled to wear the valor devices.
The Boorda extramarital affair was an obvious potential embarrassment to the Clinton administration. At the time, President Bill Clinton was engaged in his own extramarital affair with White House staffer Monica Lewinsky."

This story is developing.