Confine kings and queens to decks of playing cards
By The Wayne Madsen Report
Although it is difficult to believe that in the 21st century there are still kings, queens, and other potentates in the world, it is even harder to fathom such leeches on taxpayers calling political shots. However, that is exactly what Spain experienced recently when King Felipe VI weighed in on the results of a popular referendum in Catalonia that overwhelmingly backed independence for the region.
The president of Catalonia, Carles Puigdemont, denounced the king, saying, "The king has adopted the (national) government's position and policies which have been disastrous with regard to Catalonia. He is deliberately ignoring millions of Catalans." In a televised address to the nation, Felipe railed, "With their irresponsible behavior they [the Catalans] put their own region and all of Spain at risk." However, Puigdemont countered the King by stating the Spanish monarchy refuses to even negotiate with Catalonia, "I will repeat it as many times as necessary: dialogue and agreement are part of the political culture of our people. However, the state has not given any positive answer to those offers." 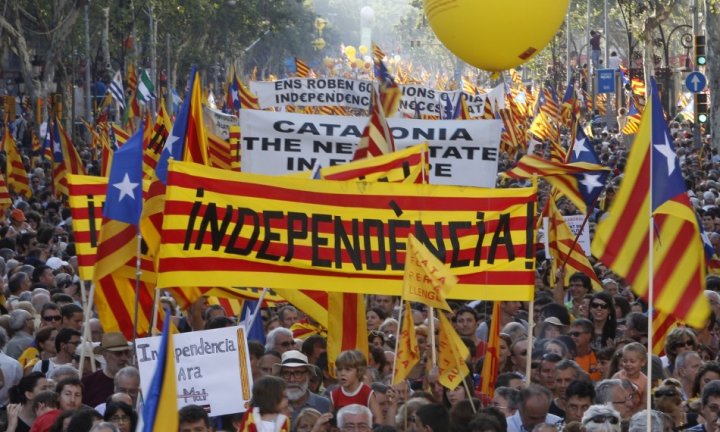 Spanish Prime Minister Mariano Rajoy totally rejected Catalonia's offer of dialogue. Rajoy accused the Catalonian government of blackmail.
King Felipe bears a lot of family baggage in coming to the support of Rajoy in his confrontation with the Catalonian government and people. It was the ideological forefather of Rajoy's People's Party, Generalissimo Francisco Franco, Spain's fascist leader, who placed Felipe's father in the position of Spanish regent, or "Prince of Spain." Although Spain's monarchy had been abolished in 1931 by the Second Spanish Republic, Franco restored the kingdom after winning the Spanish Civil War in 1939 with the help of Adolf Hitler and Benito Mussolini. Franco made Juan Carlos his heir apparent in 1969 after the "prince" swore allegiance to Franco's fascist movement.
Franco skipped over Juan de Borbón, the Count of Barcelona, the son of King Alfonso XIII, the nation's last king before the republic was established in 1951, and chose Juan Carlos. Juan de Borbón was seen by Franco as "too liberal," a euphemism for the Count having too much sympathy for Catalonia, the capital of which is Barcelona.
There is a widely-held belief in Spain that Juan Carlos shot to death his younger brother, Prince Alfonso, at the Borbón family's estate in Portugal, on purpose. Although Juan Carlos and royal aides claimed the shooting death was an accident, it was revealed that the revolver used by Juan Carlos was a personal gift from Franco. The only two people in the room when the shot was fired were Juan Carlos and Alfonso. The Spanish embassy in Lisbon crafted a press release that rivals any of the fake news seen today:
"Whilst His Highness Prince Alfonso was cleaning a revolver last evening with his brother, a shot was fired hitting his forehead and killing him in a few minutes. The accident took place at 20.30 hours, after the Infante's [Alfonso] return from the Maundy Thursday religious service, during which he had received holy communion."
During the Spanish Civil War, Franco's fascists committed genocide against the Catalans and Basques, both ethnic groups strong supporters of the loyalist forces of the Second Republic. During the first decade of Franco's rule, Catalans and Basques were massacred in the "White Terror," which saw as many as 400,000 opponents of the fascists fall victim to Franco's feared Guardia Civil. Franco ruthlessly made illegal the Catalan language; abolished Catalonia's instruments of autonomy; proscribed Catalonian political parties, trade unions, and newspapers; and wiped out all vestiges of Catalan culture. It is with these historical underpinnings that Catalonia today seeks to part ways with a Spanish government steeped in fascist traditions and a blind eye toward the past genocide of the Catalan people.
As if to remind Catalans of the White Terror, Rajoy's government dispatched helmeted and armed Guardia Civil members to forcibly shut down independence referendum polling places across Catalonia, beat voters and protesters, arrest Catalonian government officials, and clash with Catalonian firefighters trying to protect Catalans who were attempting to vote. The Rajoy regime has threatened to charge with sedition Major Josep Lluis Trapero, the chief of the Catalonian police force, the Mossos d’Esquadra, for failing to take the side of the Guardia Civil and other Spanish state security forces against his own people. Trapero faces up to 15 years in prison if convicted.
European integrationist supporters of monarchies in the European Parliament, including the quisling Green Party, as well as Guy Verhofstadt, the Belgian chairman of the "liberal" ALDE European parliamentary group, insisted that Catalonia must remain, at all costs, a part of Spain. These so-called "liberal" and "centrist" parties made common cause with the proto-fascist Rajoy and Donald Trump, who recently insisted on Spain remaining united at a White House press conference held with the Spanish prime minister.

Verhofstadt, a major opponent of the Brexit referendum in the United Kingdom, is also a fierce opponent of the secession from Belgium of Flanders as an independent republic. Verhofstadt served as Belgian prime minister from 1999 to 2008, during a time when Belgian King Albert II was embroiled in a festering scandal involving pedophiles at the highest levels of the government, church, and business. In 2013, Albert suddenly abdicated the throne in favor of his son Philippe.
Felipe of Spain, Philippe of Belgium, Willem-Alexander of the Netherlands -- who insists on retaining colonies as his personal fiefdom in Aruba, Curacao, Bonaire, St. Maarten, St. Eustatius, and Saba, Elizabeth II of the United Kingdom -- who quietly campaigned against independence for Scotland and republic status for Jamaica and Barbados, Mohammed VI of Morocco -- who brutally governs the stolen nation of Western Sahara, and the jihadist-supporting monarchs of Saudi Arabia, Kuwait, and Abu Dhabi have seen their era come and go. The only kings, queens, and knaves should be those found in every deck of playing cards and not governing from palaces in European capitals and desert sands of the Middle East.