The real State of the Union By Pepe Escobar

A posting from the US Air Force's Global Strike Team claims Martin Luther King would be "proud" of its weapons. Photograph: screen grab of US Air Force release.
(updated below)
Yesterday, I highlighted the extraordinary anti-war speech Martin Luther Kinggave in 1967, in which he said, among other things, that the US government is "the greatest purveyor of violence in the world today" and the leading exponent of "the deadly Western arrogance that has poisoned the international atmosphere for so long." The speech was devoted to arguing that America's militarism and war-fighting were degrading the soul of the nation and the citizenry and - for financial, political and cultural reasons - were making domestic progress impossible.
The US Air Force's Global Strike Command yesterday posted a truly vile bit of propaganda in which it appropriates King's image, name and words in order to claim that he would "be proud to see our Global Strike team . . .standing side-by-side ensuring the most powerful weapons in the US arsenal remain the credible bedrock of our national defense" (ellipses in original):

"The Department of Defense is a leader in equal opportunity for all patriots seeking to serve this great nation. . . The vigilant warriors in AFGSC understand they are all equal and unified in purpose to provide a safe, secure and effective deterrent force for the United States. . . .
"Dr. King would be proud to see our Global Strike team - comprised of Airmen, civilians and contractors from every race, creed, background and religion - standing side-by-side ensuring the most powerful weapons in the US arsenal remain the credible bedrock of our national defense. . . Our team must overlook our differences to ensure perfection as we maintain and operate our weapon systems. . . Maintaining our commitment to our Global Strike team, our families and our nation is a fitting tribute to Dr. King as we celebrate his legacy."

The US military - which is currently bombing Afghanistan, Pakistan, and Yemen at least, all in secret - just exploited one of the 20th Century's greatest proponents of nonviolence and most vehement opponents of US militarism as a public face for its aggression and violence in the world. While King may have preferred to see an integrated military rather than one divided by racial strife, his condemnations of US militarism were particularly harsh when it came to the way the US military taught American citizens to embrace a culture of violence ("I knew that I could never again raise my voice against the violence of the oppressed in the ghettos without having first spoken clearly to the greatest purveyor of violence in the world today - my own government").
The self-described mission of the Global Strike Command is to "develop and provide combat-ready forces for nuclear deterrence and global strike operations". The US military is actually publicly claiming that the 1964 Nobel Peace Prize winner and steadfast critic of US imperialism would be an admirer of its massive stockpile of nuclear weapons, its global assassination programs, and its covert use of violence in multiple countries around the world, including where no wars are declared (in fairness, though, its Commander in Chief is himself a winner of the Nobel Peace Prize). Merely to describe this agitprop is to illustrate its repulsiveness.

The great war journalist Jeremy Scahill, and the accomplished filmmaker Rick Rowley, have just premiered their new documentary, "Dirty Wars", at the Sundance Film Festival. I hosted a panel discussion of political documentarians in New York several months ago that included Scahill and "Dirty Wars", and this film - which chronicles the Obama administration's secret wars in Yemen and other places - will make a huge impact. I really encourage you to watch or read the transcript of the interview Scahill and Rowley did today on Democracy Now about their new film and the militaristic policies of the Obama administration. As you do so, I don't think you'll have much doubt about whether "Dr. King would be proud" of these policies.

Having the military exploit Martin Luther King to support the militarism which he despised seems to be a trend. Here's a tweet posted on the official account of the US Marine Corps on Monday: 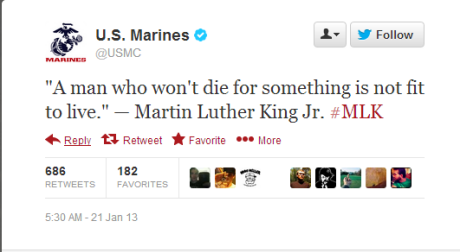 And an article posted on the official Pentagon website last year during the week of King's birthday celebration expressly argued that King would support current US wars: 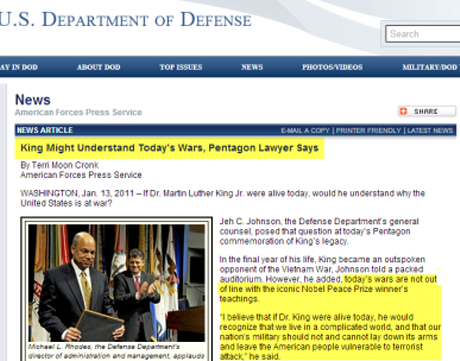 This isn't a grotesque one-time aberration but rather a grotesque, institution-wide propaganda theme: to hold up Martin Luther King, of all people, as the justifying symbol of US aggression. That is just unspeakably foul.
Posted by Macu at 1/26/2014 10:54:00 AM