Top ten Soros targets in 2016 by Wayne Madsen Report
George Soros has a list and he's checking it twice. The list is where he will concentrate the efforts of his Central Intelligence Agency-connected non-governmental organization (NGO) assets in 2016. While supporting the CIA's agenda, Soros always manages to maximize his profits from the chaotic situations he and his operations engineer around the world.

1. Soros will continue to facilitate the arrival of hundreds of thousands of additional, mainly Muslim migrants from the Middle East, Africa, and Asia to Europe. The political and border destabilization of Europe and the resulting introduction of draconian security measures by the European Union are high on Soros's agenda.

3. Soros will martial his resources in Haiti to ensure that banana company mogul Jovenel Moise wins the presidential run-off in Haiti's postponed election. Moise is the hand-picked successor of current president Michel Martelly, a singer by profession. Soros's election engineers succeeded in knocking out of a first- or second-place finish the candidate representing former president Jean-Bertrand Aristide, who is despised by Bill and Hillary Clinton, as well as Soros, for his leftist populist policies.

4. Soros's Open Society Institute and other NGO contrivances will continue to back the failed state of Ukraine. Soros will especially shore up Prime Minister Arseniy Yatsenyuk, the American Finance Minister Natalie Jaresko, and Odessa regional governor Mikheil Saakashvili, the former Soros-installed president of Georgia who is now a wanted criminal by the government in Tbilisi. Soros will continue to see to it that Ukrainian regular and irregular military forces continue to cause border problems for the Russian autonomous republics of Lugansk and Donetsk in the east and that sanctions against officials of Lugansk, Donetsk, and Crimea are not only maintained but strengthened.

5. Soros will press the opposition-controlled National Assembly of Venezuela to rescind Venezuela's diplomatic recognition of Abkhazia and South Ossetia, two republics that broke way from Georgia.

6. Soros's operatives in China will continue to stir up political problems for Beijing in the special administrative regions of Hong Kong and Macao with increased street demonstrations. Soros will also step up his financial and political support for secessionists in Tibet, East Turkestan (Xinjiang-Uighur Autonomous Republic), and Inner Mongolia.

7. With the Argentine presidency and the Venezuelan National Assembly falling under the control of right-wing fascist-oriented political parties, Soros will mobilize his Latin American assets to force Brazilian President Dilma Rousseff from the presidency. She has been battling an attempt by the Brazilian Congress to impeach her. Soros despises Rousseff for a number of reasons but chiefly they are her commitment to the BRICS alliance of Brazil, Russia, China, India, and South Africa; her family links to Bulgaria during its communist past; her rejection of Soros's "Third Way" politics; Rousseff's opposition to privatization of state-owned enterprises -- industries into which Soros wants to invest heavily; and Rousseff's opposition to Brazilian public schools being used to promote homosexual life styles. Soros's main goal is to have Rousseff replaced with a right-winger who will pull Brazil out of the BRICS bloc. 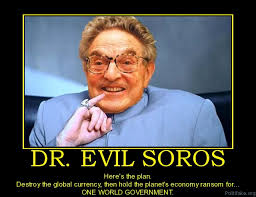 8. Another BRICS leader Soros sees as vulnerable is Jacob Zuma, the president of South Africa. Soros's goal is to destroy the BRICS by peeling away South Africa and Brazil from the alliance, leaving only China and Russia as members after India can be persuaded the alliance is dead. Zuma and his African National Congress are also Soros targets because of their opposition to Israeli policies in Palestine and same-sex marriage. Soros backs the Democratic Alliance party, which receives much of its financial support from South African Zionists and the Jewish-dominated diamond industry.

9. Whoever the Republican U.S. presidential candidate turns out to be, Soros will throw his money and the backing of his NGOs to Hillary Clinton, a personal friend. Soros can be expected to finance intense opposition research and a massive 527 political action committee ad campaign against the GOP presidential candidate.

Soros will work to defeat the Bolivian constitutional amendment referendum that will permit President Evo Morales to run for another term. They will also work against the re-election of Robert Fico as Prime Minister of Slovakia and the election of Samia Nkrumah, the daughter of Ghana's founding president Kwame Nkrumah as president of Ghana. In the Tanzanian constitutional referendum, the Soros forces will seek to protect the present union status quo and defeat any attempt by Zanzibar to secede and go its own way.