Is the CIA behind sonic attacks in Havana? By TheWayne Madsen Report


Is CIA behind sonic attacks in Havana?
By TheWayne Madsen Report
By insisting that the Cuban government is behind mysterious alleged sonic weaponry attacks on American diplomats in Havana, the Trump administration wasted no time in downgrading diplomatic relations with Cuba by withdrawing over half of its diplomatic staff in Cuba and expelling 15 Cuban diplomats in Washington. The break in relations with Cuba is in line with other Trump actions intended to reverse every action implemented during the 8-year term of Barack Obama, including normalization of relations with Cuba. Trump called the normalization of ties with Havana "a completely one-sided deal." It is also known that Trump's businesses had previously violated U.S. sanctions on Cuba to advance potential Trump-owned hotels and resorts on the island.
The Trump administration has stated that it does not know what is causing the high-pitched cricket-chirping sound claimed to have damaged the health and caused deafness of not only American but also some Canadian diplomats in 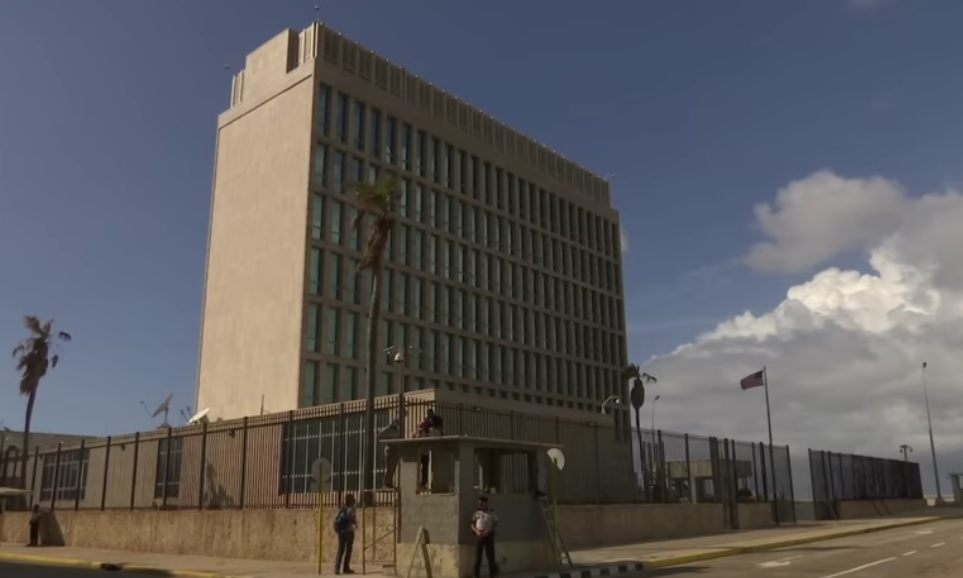 Havana. The Cuban government even invited the FBI to come to Cuba to join in its investigation of the sonic attacks. The Trump administration refused the Cubans' invitation. Nevertheless, without a shred of evidence, Trump's spokespeople blame the Cuban government for the sonic interference directed at the U.S. embassy [pictured left].
The corporate media is ignoring the one possible source for the sonic attacks that stands responsible for the only known sonic attack on a diplomatic mission in recent history -- the Central Intelligence Agency. Not only is the CIA led by a Trump sycophant with no previous intelligence background -- former Representative Mike Pompeo (R-KS) -- but the CIA is being directed to adopt many of the "false flag" intelligence operations of the Cold War years. These include blaming other countries for operations carried out by agents of the CIA. In the case of Cuba, the CIA can rely upon a network of Florida-based Cuban-American and other Latin American agents who have been integrated into Cuban government and business institutions after traveling to the island from third countries like Mexico, Nicaragua, Panama, and Venezuela.
The Trump administration is also cautioning American tourists to avoid Cuba, claiming that sonic weapons could be aimed at their hotels. There is no plausible reason why Cuba would do anything to harm its financially beneficial tourist industry, however, there are several reasons why the Pompeo-led CIA, in collusion with Florida Senator Marco Rubio's right-wing Cuban network in Miami, would suggest that Cuban hotels are targets of sonic weaponry.

The entire "sonic weapon" attack operation appears to be a major false flag attack designed to hurt the Cuban economy and freeze relations between Washington and Havana. The reported sonic attacks on Canadian diplomats are obviously targeted at the government of Prime Minister Justin Trudeau. The Trudeau family, including the late Prime Minister Pierre Trudeau, the present prime minister’s father, remained close friends of Cuban President Raul Castro and his late brother and president, Fidel Castro. Anything that could be used to sour close Canadian-Cuban ties would be implemented by the CIA under the direction of Pompeo, a fundamentalist Christian "creationist," who rejects most conclusions of modern science, including evolution and the age of the Earth.
The fingerprints of the CIA have been found on at least one sonic attack against a foreign mission in Latin America. In 1990, after Panamanian leader Manuel Noriega sought refuge from invading American troops in the Vatican Apostolic Nuncio in Panama City, U.S. forces, using CIA psychological warfare methods crafted by the CIA, aimed ear-splitting heavy metal music at the Vatican mission from large speakers on the street. The use of the sonic weapon to force out Noriega was not only a violation of the Vatican mission's diplomatic extraterritoriality but also the sanctuary policy of the Roman Catholic Church. Noriega eventually surrendered to the American forces.
After Honduran President Manuel Zelaya was ousted in a 2009 coup instigated by Secretary of State Hillary Clinton and the CIA, the Honduran leader, who had been exiled from the country at gunpoint, sneaked back into the country and took up residence inside the Brazilian embassy in Tegucigalpa, the Honduran capital. After the CIA-supported Honduran military junta cut off electricity, water, and food supplies to the embassy, they began using sonic-type weapons that were much-improved from those used against the Vatican mission in Panama City almost twenty years earlier. Zelaya claimed that Israeli mercenaries working under the direction of the junta and CIA aimed high-frequency weapons at the Brazilian embassy. Apparently, the Israelis used a cell phone jamming system to cause discomfort for Zelaya and others inside the embassy. Found on the roof of the building next to the Brazilian embassy was a C-Guard cell phone jammer manufactured by NetLine of Tel Aviv.

The Israelis have used sonic weaponry to terrorize the population of Gaza. Using F-16s supplied by the United States, the Israeli Air Force has often created sonic booms over Gaza by flying low and causing shock waves to shake buildings, break windows, and blow off doors, all with the intent of causing massive fear and hysteria.
Eyewitnesses outside the Brazilian embassy claimed that the junta's personnel used a "high-pitched sonic device" on the embassy. Such sonic weapons had recently been used by police and military forces against protesters at the 2009 G-20 summit in Pittsburgh. 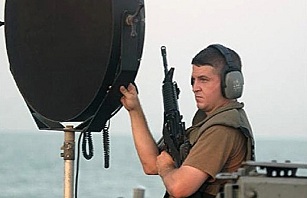 Today, Long-Range Acoustic Devices, or LRADS, can cause extreme pain by directing a 150-decibel beam of sound at crowds of people, including protesters. LRADS are considered semi-lethal weapons. Israel and the United States account for most LRAD manufacturing. [Israeli LRAD pictured left].
CIA archives show the agency has been interested in ultrasonic devices, including "acoustic artillery" and "static sirens," going as far back as 1952.
In 2011, Alan Gross, a U.S. Agency for International Development (USAID) contractor with Development Alternatives Inc. of Bethesda, Maryland, was arrested in Cuba and later convicted of espionage. Gross was ostensibly installing Internet links for Cuba's small Jewish community, something the leading rabbis for the community denied. When he was arrested by Cuban security police, Gross was found to have cell and satellite phone equipment in his possession. The question of whether other foreign intelligence agents, in addition to Gross, smuggled sonic weaponry masked as telecommunications equipment into Cuba, is extremely germane to answering the question as to who is behind the sonic attacks on the U.S. and Canadian embassies in Havana. If the congressional intelligence oversight committees were doing their jobs, which is rarely the case, they should have Pompeo, under oath, answering these and other questions about the current state and use of CIA sonic weaponry.