U.S. tries to drive wedge between Putin and Assad by Wayne Madsen


U.S. tries to drive wedge between Putin and Assad by Wayne Madsen
President Obama's policy of initiating "constructive engagement" with Russian President Vladimir Putin was prompted by advice given to the American president by Turkish President Recep Tayyip Erdogan and Central Intelligence Agency director John Brennan. Obama has relied on the two for most of his guidance on Middle Eastern affairs. However, both Erdogan and Brennan are fierce critics of Syrian President Bashar al-Assad and Assad's government is highly skeptical of the actual reasons behind the Obama-Putin rapprochement, fearing that it is a ploy to convince Moscow to abandon its long time ally in Damascus.

Last November, Putin was virtually isolated at the G20 Summit in Brisbane and attendees lined up, one after another, to lambaste Putin over the retro-cession of Crimea back to Russia from Ukraine and Putin's support for eastern Ukrainian Russian-speaking rebels. Australian Prime Minister Tony Abbott even threatened to "shirt front" Putin, which is an Australian football term meaning chest bump, at the summit. One iconic photo from the summit showed Putin eating lunch alone at a table. Canadian Prime Minister Stephen Harper said he told Putin, "l'll shake your hand, but I only have one thing to say to you: Get out of Ukraine!" Putin, disgusted with the childish behavior from the G20 leaders, including Obama, left Australia early to return home to Moscow.

However, at this year's G20 summit in Antalya, in Islamic State-friendly Turkey and not far from Syria, G20 leaders could not wait to sidle up to Putin. Gone were Abbott, who was ousted in an political party back benchers' coup by Malcolm Turnbull, and Harper, who was roundly defeated by Liberal leader Justin Trudeau. Turnbull and Trudeau are friendlier to Russia than their predecessors.

Putin dining alone at the G20 Summit in Brisbane in November 2014.

Putin in negotiations with Obama at G20 in Antalya, Turkey. Obama national security adviser Susan Rice [back turned toward camera] and interpreter join discussion. Assad fears that Obama is trying to convince Putin to abandon Assad in favor of Turkish- and Saudi-controlled opposition forces.
There is solid evidence that there is a propaganda campaign designed to split Moscow from Damascus. Although it has been proven by Syrian Catholic Mother Superior Agnes Mariam and others that the CIA- and Saudi-backed Free Syrian Army launched the sarin gas attack against civilians in Ghouta in a "false flag" operation designed to pin blame on Assad, the same neoconservative and Israel Lobby meme of Assad "gassing his own people" is making its rounds again on the Zionist-controlled MSNBC and The Daily Beast. In addition, the neocons, upset with the G20's decision to work with Putin and Assad, has put forward a conspiracy theory making its rounds in the Zionist-owned media that Putin and Assad jointly created the Islamic State of Iraq and the Levant (ISIL).

Consequently, as a result of the negotiations between Putin and Obama, as well as Israeli Prime Minister Binyamin Netanyahu's recent Oval Office talks in Washington with Obama, Syria's government is concerned that there is a plan afoot by Washington, Moscow, and Jerusalem to divide the Middle East into spheres of influence, with Moscow being guaranteed port and pipeline access in Syria, Iraq, and a planned independent Kurdistan comprising Kurdish areas in Iraq and Syria. Syria has activated its public relations resources in Europe, particularly in France and Germany, to advance the story that Putin has opted to work with Obama, Erdogan, and Netanyahu to redraw the borders of the Middle East, with Assad being the chief casualty.

Damascus is playing a trick of its own in putting forth the Russ-American secret "new Middle East" plan. Syria's interpretation of the plans for the redrawing of the Middle East map includes having Saudi Arabia split into three different nations: a Shi'a-dominated oil-rich Nejd in the east, an insulated Saudi rump state around Riyadh, and a Turkish-influenced Hejaz in the west, which would include the two Islamic holy cities of Mecca and Medina. The Syrian interpretation has resulted in the Saudis becoming alarmed at being shut out entirely from the Syrian and Kurdish negotiations and the specter of thousands of jihadis it has supported in Syria and Iraq heading to Saudi Arabia looking for revenge after their defeat on the Syrian and Iraqi battlefields.

Assad and his government, however, should rest a bit easier, according to WMR's sources in Europe. Putin has no plans to abandon Assad, even though Moscow supports the plan for United Nations-brokered peace talks between Assad and the Syrian rebels, not including the Islamic State and its allies.

Russia remains suspicious of Obama's and CIA director Brennan's lack of enthusiasm for combating ISIL. The day before the Friday 13th ISIL attacks in Paris, Obama said that he favored merely "containing" ISIL in Syria and Iraq, not wiping it out. It is known that ISIL has received recruiting, financial, military, and intelligence support from Saudi Arabia, Turkey, and Qatar. In addition, the CIA, Mossad, the Israel Defense Force, and Turkish MIT intelligence has provided ISIL and its allies with weapons, ammunition, and logistics support in Syria and Iraq. Only after the Paris terrorist attacks did the U.S., belatedly, order its A10 attack planes to strike a convoy of 116 ISIL oil tanker trucks smuggling oil out of Syria. The U.S. had previously chose not to attack ISIL oil trucks. ISIL received much of its financial support from the sale of smuggled oil on the world's petroleum spot market.

Putin is acutely aware that Ukrainian President Petro Poroshenko and his government is quietly assuring, through Ukrainian nationalist leaders like Dmitry Korchinsky, that top ISIL commanders will be given asylum in Ukraine as long as they carry their war on against Russia in the Donbas region and Chechnya. Korchinsky, the leader of the neo-Nazi Ukrainian "Brotherhood," actively participated in the Maidan Square uprising against Ukrainian President Viktor Yanukovych Korchinsky and his nationalist activists received support from the George Soros network, U.S. Assistant Secretary of State for European Affairs Victoria Nuland and U.S. ambassador to Kiev Geoffrey Pyatt (both of whom are Jewish), the CIA, and U.S. Agency for International Development (USAID). Obama and the other members of the "Quint," Britain, the U.S., France, Germany, and Italy, said they had no plans to relax Western sanctions imposed against Russia over Ukraine. As long as Ukraine is prepared to welcome ISIL guerrillas to its soil to fight against Russia, Assad can rest easy that Putin will never sacrifice him in favor of the duplicitous interests of the United States and European Union.

November 16-17, 2015 -- Soros operatives hide terrorist links of Syrian migrants by Wayne Madsen
Groups like Human Rights Watch, the International Rescue Committee, the International Organization of Migrants, and other non-governmental organizations are spewing forth enormous amounts of disinformation to convince Europe and the rest of the world that there are no Islamic State terrorists among the sea of refugees from Syria, Iraq, and other countries who swamped Europe in recent months.

The NGOs have suggested that those who claim that there are terrorists among the migrants already in Europe are xenophobes and racists ignore the fact that the Islamic State of Iraq and the Levant (ISIL) recently claimed that 4000 of its members had been embedded among the refugees who are already in Europe. ISIL said, before the Friday the 13th ISIL massacre in Paris, that its refugee sleeper agents were under orders to carry out terrorist attacks in retaliation for French military attacks on ISIL positions inside Syria.

George Soros-funded network of non-governmental organizations are advancing the meme that none of the terrorists who went on the killing spree through Paris entered Europe with the masses of refugees. The Soros-owned and -operated Human Rights Watch has suggested that the Syrian passport found next to one of the dead terrorists in Paris was a fake.
Even after French authorities determined that one of the dead terrorists in Paris was, in fact, Ahmad Almohammad, a Syrian refugee from Idlib who entered Europe from Turkey on October 3 through the Greek isle of Leros with a Syrian passport, Soros’s operatives cried foul and suggested the Syrian passport was a fake. The Soros gang demanded that the refugee flow from the Middle East, Asia, and North Africa continue unabated despite the bloodshed in Paris, the discovery of an ISIL support cell in the Brussels suburb of Molenbeek, and the arrest in Germany of a Montenegrin man who was driving to Paris with a small arsenal of weapons in his car. Montenegro, like other Balkans countries, have been used as "soft" entry points for Muslim migrants  entering Europe from refugee centers in Turkey, Lebanon, and Jordan.

In fact, Almohammad transited from Greece to Macedonia, Serbia, Croatia, Hungary, Austria, and then into Germany and, ultimately, to France. One such call to maintain the current migratory status quo came from the Emergencies Director of Human Rights Watch, Peter Bouckaert. The current European "welcome mat" has enabled terrorists like Almohammed and others to carry out their deadly tasks.

It should be noted that in 2010 Soros “leased” Human Rights Watch for $100 million over a ten-year period. Since that time, the NGO has served Soros’s sordid global interests, including undermining the government of Syrian president Bashar al-Assad and concocting phony news reports about “barrel bombs” and chemical weapons attacks by Syria’s army. Bouckaert claimed the Syrian passport found on the dead terrorist migrant was fake. Bouckaert had no evidence to back up his statement and his claim turned out to be false.
Because of pressure from groups like Human Rights Watch, Amnesty International, International Organization of Migration, and other Soros-financed geopolitical tools, as well as ISIL propagandist media operations like Al Jazeera, the Syrian government relaxed its stringent passport renewal policies after it was criticized for doing nothing to help Syrians who had fled the civil war ravaging the country. In April 2015, Syrians abroad, even those who left the country illegally, members of exiled opposition groups, and Syrians who dodged the military draft, were permitted to renew their Syrian passports at Syrian consulates in Turkey, Greece, Lebanon, and the United Arab Emirates. This was a direct concession by Assad to the Syrian opposition before peace talks were due to commence in Geneva.

The Syrian opposition claimed that Assad's government was somehow responsible to provide the refugees with passports because they fled their homes so fast, they had no time to collect identity papers, birth records, and other documents, including passports. Syrian government consulates and embassies were extremely liberal in providing anyone claiming to be a Syrian refugee with passports and other documents, including "family booklets" that record all the names of a Syrian citizen's family members.
It was in Greece where Almohammad was issued his emergency Syrian passport, which Human Rights Watch misrepresented as counterfeit. Is Human Rights Watch perhaps trying to divert attention away from the fact that terrorists are obtaining valid passports to enter Europe? 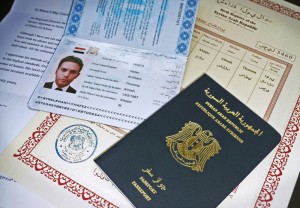 HRW and other Soros-influenced NGOs also forced suspension of the Dublin II rules. The rules require the forcible return by European Union member states of a refugee to the country where he or she first entered European Union territory. Germany suspended the rules and claimed responsibility for any refugee, including those who first entered European Union space through Greece. Almohammad is a prime example of Germany providing cover for an ISIL terrorist. Almohammad was in Germany before he traveled to France.

George Soros certainly shares in the civil liability for the ISIL terrorists arriving in France amid the throngs of refugees from the Middle East. Soros's current real-time net worth is $24.5 billion. That is more than enough to pay compensation to the families of the Friday the 13th massacre victims and other victims from past and future terrorist attacks carried out by ISIL "refugees" who entered Europe courtesy of Soros's various migrant assistance programs.
Posted by Macu at 11/16/2015 02:41:00 PM