A tale of two Cubans -- one an American hero, the other not so praiseworthy BY Wayne Madsen


A tale of two Cubans -- one an American hero, the other not so praiseworthy
BY Wayne Madsen
There are some similarities but many fundamental differences between Cuban immigrants to the United States Otto Macias and Rafael Cruz. Macias, who abandoned Cuba during the throes of the Cuban Revolution, later enlisted in the U.S. Army and was sent to Vietnam. Today, he lives back in Cuba and has seen his veteran's benefits cut-off by the U.S. government. Suffering from post-traumatic stress syndrome since Vietnam, Macias returned to Cuba in 1980 to visit relatives and decided not to return to the United States. Macias is a true American hero. He is richly deserving of retroactive payment of his paltry $60 a month veterans' pension, which was cut off by the Department of Veterans Affairs less than a year after her took up residence in Cuba.

Macias's decision to stay in Cuba after opposing Fidel Castro's revolution and fighting against the Communists in Vietnam stands in stark contrast to another Cuban who departed for American shores. In 1957, Rafael Cruz, a former salesman for the U.S. intelligence-linked RCA Corporation, left Cuba for the United States. Cruz claims he fought with Castro against the fascist government of Fulgencio Batista but soured on the revolution. However, Cruz left Cuba two years before the Castro revolution.

Cruz was in New Orleans during 1963, the year that New Orleans District Attorney Jim Garrison claimed his city was the focal point for the plot to assassinate President John F. Kennedy. The plot involved a number of Cuban exiles. Accused assassin Lee Harvey Oswald claimed, as part of his "fake defector" persona developed by the Central Intelligence Agency, to be a member of the pro-Castro Fair Play for Cuba Committee. The committee just happened to share an office address with Guy Bannister's private investigation agency.

Guy Banister Associates was located on the ground floor of the Newman Building at 5312 Lafayette Street while Oswald's "pro-Castro" Fair Play for Cuba Committee was located around the corner but on the ground floor of the same building but with an address of 544 Camp Street. Banister was a retired FBI agent who continued to carry out tasks for the bureau and the CIA. The Newman Building housed a number of anti-Castro groups, including the Cuban Revolutionary Council, Crusade to Free Cuba Committee, the Cuban Democratic Revolutionary Front, Anti-Communist League of the Caribbean, and Friends of Democratic Cuba. While living in New Orleans, Cruz was also active with anti-Castro movements and the chances that he did not cross paths with Banister and the other anti-Castro activists, including CIA agent Sergio Arcacha Smith, are highly unlikely for such a close-knit community at the time.

Otto Macias, disabled US Army Vietnam vet, living almost penniless in HavanaWhile living in New Orleans with his wife and two young daughters, Cruz claimed residency at two addresses, one a low-rent apartment building off of Jackson Avenue. Cruz worked for an oil company in New Orleans. He has been less than forthcoming about the details of his time in New Orleans and the time line that included his move from Dallas.Cruz and his wife Julia divorced in New Orleans, allegedly in 1963, but this detail is also clouded in mystery. Cruz apparently registered for the draft in 1967 claiming the New Orleans' Jackson Street address. Draft registration was a requirement for resident aliens like Cruz. Cruz apparently waited until the age of 28 to register for the draft, which, because he waited so long, was a criminal offense at the time. While liable for the draft and possible service in Vietnam, a country where fellow Cuban immigrant Otto Macias gladly volunteered to serve, Cruz took off for Calgary, Canada with his second wife, Eleanor Darragh. Darragh, a native of Delaware who graduated from Rice University in Houston, worked for the same oil company in New Orleans that employed Cruz. Their son, Rafael "Ted" Cruz, Jr., now a candidate for president of the United States, claims that his mother and father worked for the same company in New Orleans but there is actually no record of an Eleanor Darragh Wilson Cruz living in New Orleans at the time.

Eleanor Wilson, married to Fort Worth, Texas native Alan Wilson, lived in London from 1960 to 1966. In 1965, their infant son Michael died from crib death. Alan Wilson, who still lives in London, told McClatchy News Service that Michael was not his son. In his autobiography, Senator Ted Cruz not only claims Michael was the son or his mother and Alan but also claims the baby died in 1965. In fact, Michael, according to London vital statistics records, died in 1966 and well after the Wilsons were divorced. Eleanor Cruz, who lives in Houston, has been mum on her marriage to Wilson and her marriage to Cruz, which lasted from 1969 to 1997. Ted Cruz was born in Calgary in 1970 and there is a major question about his eligibility to serve as president since Cruz maintained Canadian citizenship until 2013.

According to experts in Selective Service laws at the time, Cruz fits the description of a draft dodger. He only returned to the United States, with his 4-year old son Ted, Junior, in December 1974. In September 1974, President Gerald Ford offered amnesty for certain classes of draft evaders, including those like Cruz who registered late for the draft.
Cruz later claimed he became an evangelical Christian after returning to Canada from the United States to reunite with his wife and son. Today, Cruz [pictured left] is active with the Christian Dominionist movement that wants the United States transformed into a Christian theocracy.

It turns out that the oil company that Cruz and his wife worked for in Calgary was Rafael B. Cruz and Associates Ltd., which he sold to French-based Compagnie Générale de Géophysique (CCG) in 1974. CCG is linked to the large Schlumberger oil conglomerate, which, along with Halliburton, the two largest oilfield drilling companies in the world. Schlumberger had been active with the CIA and Zapata Offshore Company owned by George H. W. Bush. Moreover, Jean de Menil, the son-in-law of Schlumberger founder Conrad Schlumberger, was a key figure in the Permindex, the New Orleans-based CIA front headed up by Clay Shaw that was a key target of Garrison's investigation of the New Orleans connection to JFK's assassination in Dallas. Here, again, the senior Cruz's time line remains murky, an indication that he had some other sort of employment while in Calgary in Canada and New Orleans and Dallas in the United States.

Rafael Cruz, Sr. did not become a U.S. citizen until 2005. His early years remain clouded in mystery with strong suspicions that his later "finding Jesus" was after a long and clandestine career with the CIA, one that saw him cross paths with presidential assassins, oil company brigands, and other unsavory characters. Meanwhile, Otto Macias, a Vietnam War veteran and American hero, lives pensionless in Havana suffering from skin cancer and all-but-forgotten by the military for which he sacrificed so much.
Posted by Macu at 2/11/2016 03:34:00 PM

Why election anomalies are now the standard to be ignored
by Wayne Madsen
After the "grand theft elections" of 2000 and 2004, where Republican election manipulators and engineers led by Karl Rove stole the electoral votes of Florida and Ohio for George W. Bush, the media ignores small electoral anomalies, especially from a few precincts in New Hampshire. But WMR does not ignore these anomalies because small glitches are always indicative of major election counting malfeasance.

Soviet dictator Joseph Stalin infamously said, "Those who cast the votesdecide nothing. Those who count the votes decide everything." Our present-day versions of Stalin, namely, the elitist presidential candidates Hillary Clinton and Jeb Bush/Ted Cruz, live by Stalin's maxim. While Bernie Sanders and Donald Trump easily won the New Hampshire primary against their establishment foes, WMR noticed oddities in the election returns that merited no mention from the Tourette's afflicted and spittle-spraying Chris Matthews, the astoundingly stupid Wolf Blitzer, the Hillary-loving Rachel Maddow, the noted fabulist Brian Williams, or the team of carnival barkers at Fox News.

When we cover the election returns, we don't watch the bloviators on television but carefully watch the live returns coming in to media websites via the election reporting systems of state capital-based Secretaries of State. We do not trust the pooled news media election reporting services that have been so wrong in the past, such as the defunct Voter News Service made infamous in the 2000 election with its wrong calls on Florida.

In an system that promises one person, one vote, certain results should never be seen in election results, including a precinct where the statewide winner of an election does not receive a single vote. When weighed together, these precinct-by-precinct totals do not pass statistical probability muster.

Although most New Hampshire voting precincts use the Diebold AccuVote tabulating machines that optically scan paper ballots, these machines are, by no means, foolproof.

While Sanders and Trump were the runaway victors in New Hampshire, the real contest for the GOP was for the second- and third-place finishers, because these will be the candidates around which the establishment will gravitate toward in the upcoming primaries and caucuses. Ohio Governor John Kasich finished second and the third-place contest was a neck-and-neck race all night long between Ted Cruz and Jeb Bush, with the two tied for third place at several points during the night. Cruz ended up winning third place. For Clinton, the game was to try to keep Sanders's percentage below the mid-fifty percentage range. The gambit failed.

Now for the anomalies, captured from Decision Desk HQ (a conservative website) and the New York Times by WMR during the evening. None of these have any rational explanation other than the fact that vote manipulation as seen in previous elections was at play: 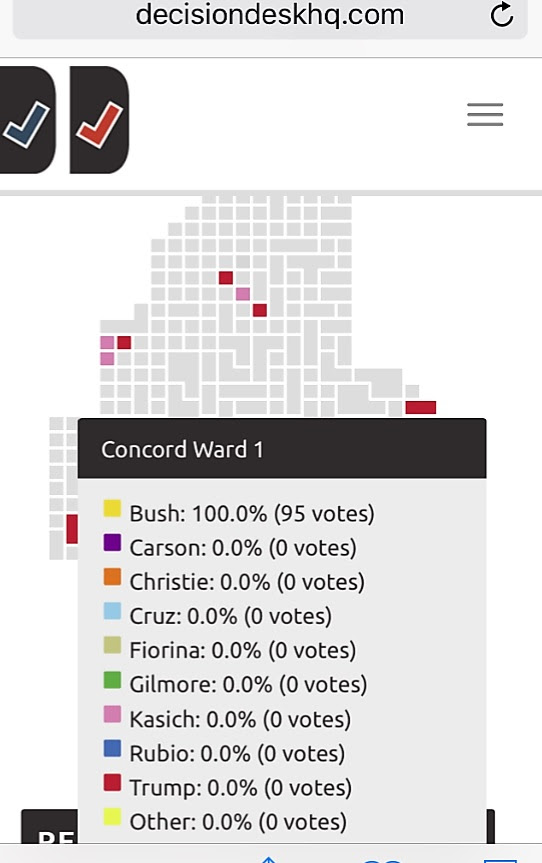 From Decision Desk: We're to believe that Bush received an initial 95 votes and all others, including Trump, received no votes from Concord Ward 1? 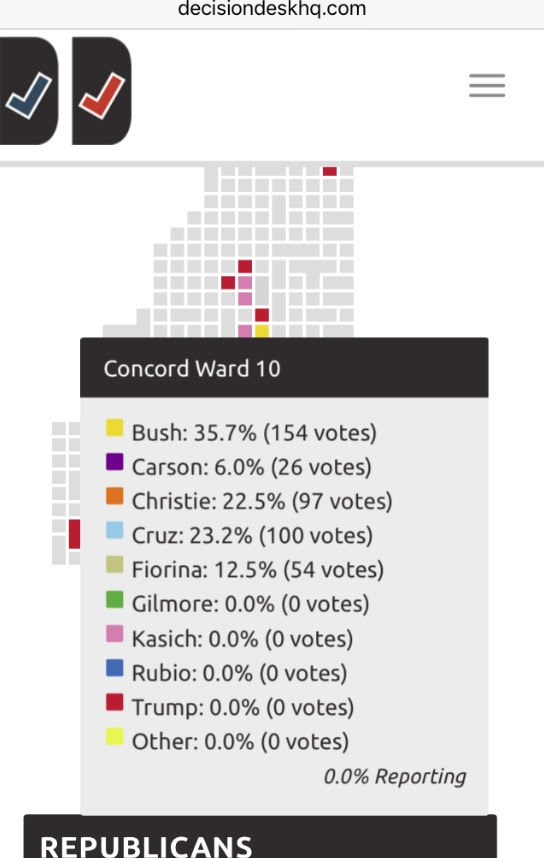 From Decision Desk: Concord War 10 reports 154 votes for Bush, 100 for Cruz, 97 for Christie, 54 for Fiorina, and 26 for Carson, while first place finisher Trump and second place finisher Kasich have goose eggs? 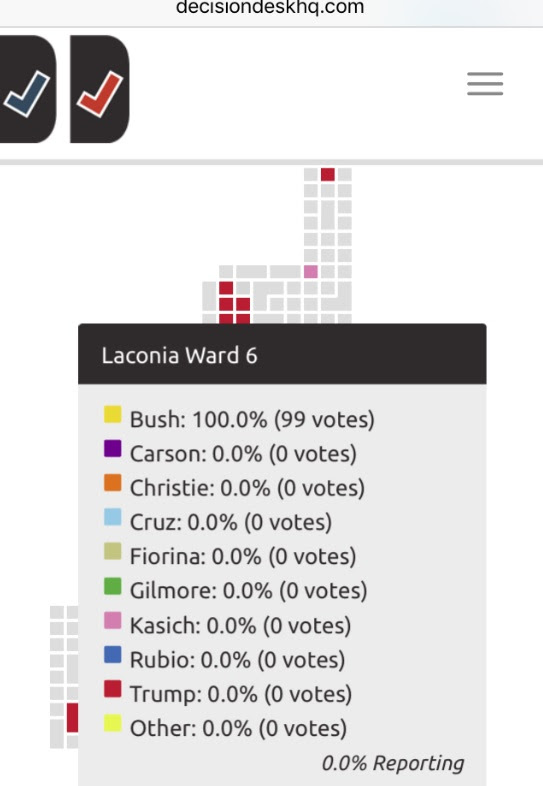 From Decision Desk: Just like Concord Ward 10, Laconia Ward 6 reports 99 votes for Bush and none for the other candidates, including statewide winner Trump. 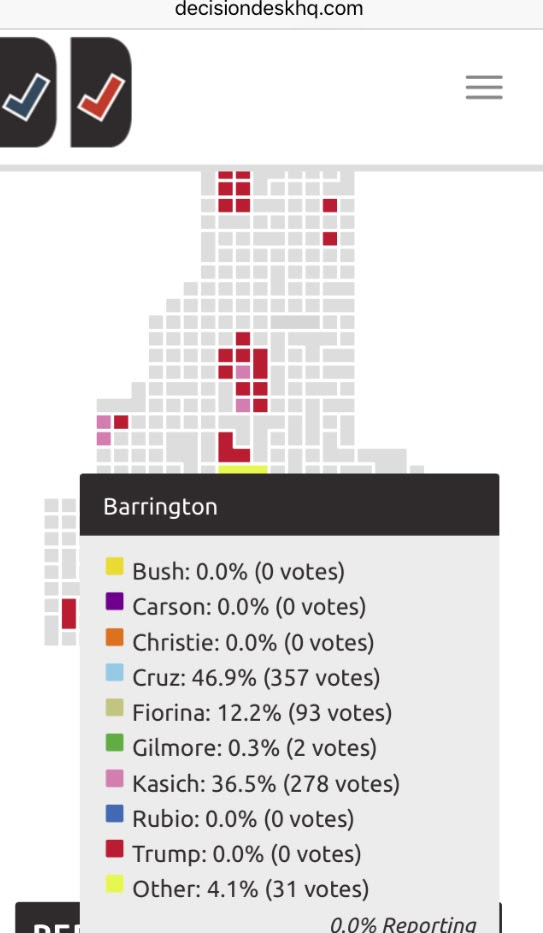 From Decision Desk: Barrington reported 357 votes for Cruz, 278 for Kasich, 93 for Fiorina, 2 votes for Jim Gilmore who received only 129 votes statewide, 31 votes for others, but no votes for Trump, Bush, Carson, or Rubio. 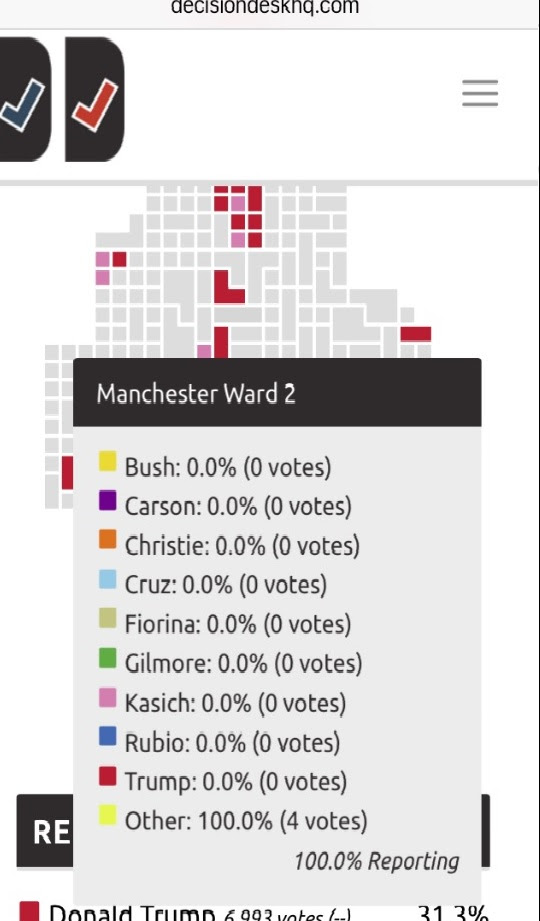 From Decision Desk: With 100 percent reporting, "other" received 4 votes and none for all the other candidates, including Trump with 31.3% statewide. 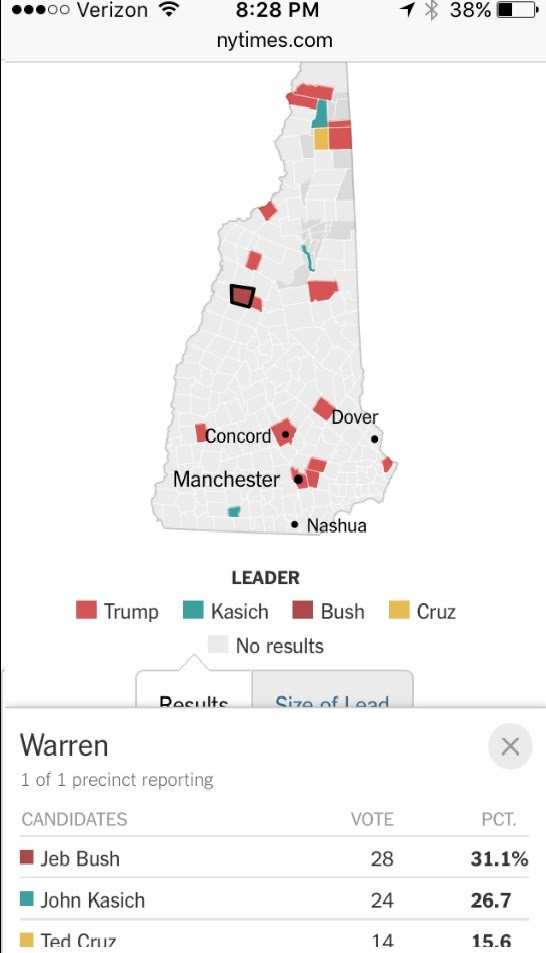 From the New York Times: Warren precinct reported 31.1% for Bush, 26.7% for Kasich, 15.6% percent for Cruz, but no votes for Trump. What is odd is that all the surrounding precincts broke for Trump by fairly wide margins: 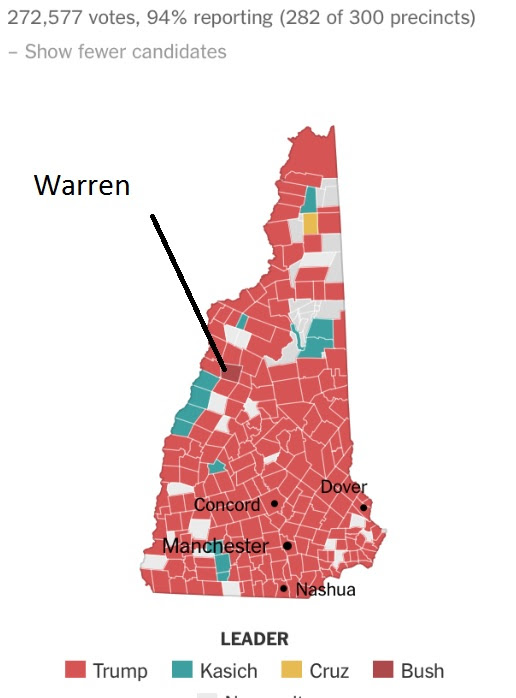 Not to be outdone in the chicanery department, Croydon precinct showed Clinton at 77.3% with no votes for Sanders with the entire precinct reporting in. Later, Sanders won the precinct handily: 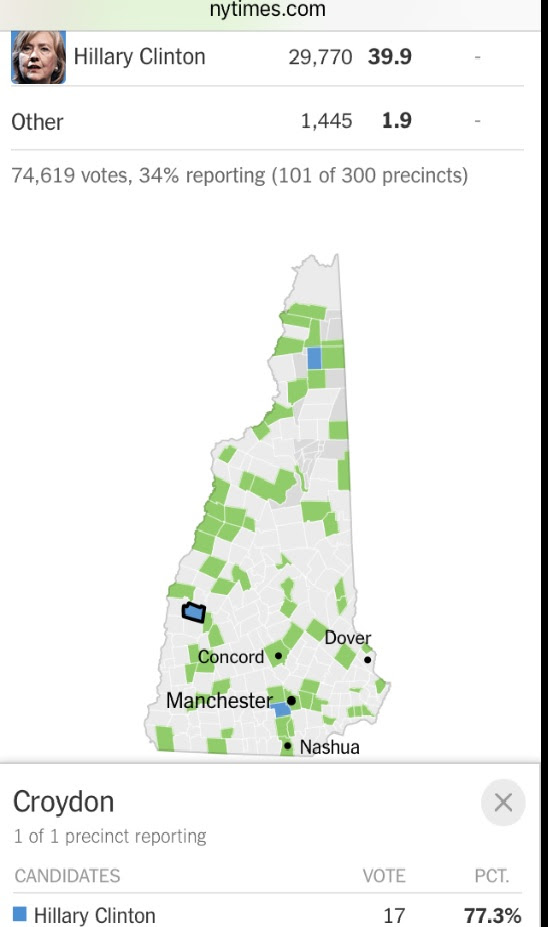 Sanders saw a flip in the results in Croydon after the precinct reported 100 percent of all votes at 77.3 percent for Clinton: 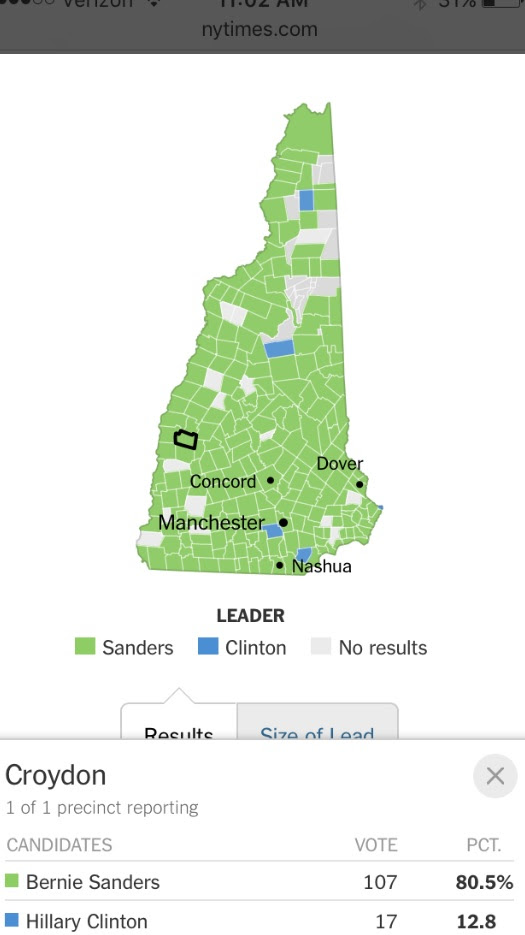