The Islamic Emirate of Syriastan By Pepe Escobar

Marshall a victim of Saudi-CIA hit

Retired United Airlines Captain Philip Marshall became an irritant to the Central Intelligence Agency and its favorite "kingdom," the Kingdom of Saudi Arabia, with his constant unraveling of the Saudi government's connections to the 9/11 attack and his subsequent promise to expose even more "shocking" information about the 9/11 attack.

After a multi-state investigation, WMR can now report that Philip Marshall and his two children, Alex, 17, and Macaila, 14, along with their family dog, were the victims of a hit contracted to professional assassins who specialize in turning murder scenes into murder-suicide scenes.

Marshall had been in contact with senior U.S. government officials, along with retired officials, who provided him with smoking gun evidence that current CIA director John O. Brennan was not only a key interlocutor between the CIA and Saudi government but also served as the key agency interface with Osama Bin Laden's forces of irregular combatants, given the name "Al Qaeda" by the CIA.

Marshall was in contact with former Florida Senator Bob Graham, the chairman of the Senate Intelligence Committee on 9/11 and someone who was aware of the contents of the 28-pages in the Joint Senate-House Intelligence Committee report on 9/11 that detailed the $2 billion slush fund created by the "Al Yamamah" bribe to Bandar from the British defense firm BAE. The slush fund was used by the CIA, Saudi ambassador to the United States Prince Bandar bin Sultan bin Abdulaziz -- currently the head of the Saudi General Intelligence Service, and the 9/11 hijackers, including Egyptian Air Force Lt. Col. Mohammed Atta, as well as "special project" mission sub-managers Saudi Air Force officer Omar Bayoumi and Saudi deputy defense minister Khaled bin Sultan, to carry out their Saudi-financed intelligence mission in the United States. The mission included flight training on Boeing 757 and 767 aircraft at the CIA's longtime aviation base at Marana Airfield/Pinal Air Park, Arizona, a joint operational base of the U.S. Special Operations Command and the CIA.

The 9/11 Commission determined that Bayoumi did not "knowingly aided extremist groups," although he provided assistance to two hijackers, Nawaf al-Hazmi and Khalid al-Mihdhar.

The contractor for the flight training was Doss Aviation, a CIA proprietary whose principal was US Judge for the Middle District of Alabama Mark Fuller. The firm has since been sold to an investment firm headed by 9/11 Commission member John Lehman, a former Secretary of the Navy. Doss's subsidiary, Professional Aviation Training Service LLC, established in 2000 to support the 9/11 hijackers, was spun off the The Carlyle Group, of which the Bin Laden family, George H W Bush, Tony Blair, and George Soros are shareholders. These and other CIA "folding tent" operations disappeared after their involvement in the 9/11 attack.

Marshall had been investigating activities at Marana Airfield based on tips he received from veterans of the Iran-contra affair. Marshall, himself, was a CIA contract pilot for Marana-based Intermountain Aviation in the early 1980s, flying CIA/Drug Enforcement Administration (DEA) informant and pilot Barry Seal on missions out of Lakefront Airport, New Orleans; Mena, Arkansas; Nicaragua; and Colombia. Marana was a project headed by the late General George Doole, the CIA's secret aviation director who ran such airlines as Civil Air Transport, Air America, Air Asia, Intermountain Aviation, Southern Air Transport, and Evergreen International. Doole, a habitué of private clubs in Washington, DC, died in 1985 at the age of 75 just as the Iran-contra scandal was breaking. CIA director William Casey, who ran the Iran-contra operation out of the White House with George H W Bush, John Poindexter, and Oliver North, died from the sudden onset of a brain tumor in 1987. Marshall met North on at least one occassion in New Orleans while the Marine Corps Lt. Col. was setting up contra support weapons and cocaine supply routes using CIA proprietaries like Intermountain and CIA bases like Marana and Mena.

Marshall was also in contact with a Republican member of the House Armed Services Committee who was interested in his findings on the Saudi connection to 9/11 and the fakery of the Bin Laden "kill" by a Navy SEAL team in 20011. The representative has a number of U.S. Special Operations personnel as his constituents.

While CIA station chief in Riyadh from 1996-1999, Brennan became a sycophant of the Saudi royal family and was particularly close to Prince Bandar and Prince Al-Waleed bin Talal, one of the world's richest men and a major stockholder in Citigroup and media and information companies that have ensured that the actual story of 9/11 has never been reported: News Corp (Fox News, Wall Street Journal, Times of London, Sky News), AOL/Huffington Post, Disney/ABC News, Apple, and Time Warner. Bin Talal is also a major client of the Saudi Bin Laden Group.

As station chief in Riyadh until 1999 and chief of staff to CIA director George Tenet, Brennan served as the chief interlocutor with his friend Ali Abdullah Saleh, the President of Yemen and a person who supplied Yemeni irregulars to supplement "Al Qaeda" units in Pakistan, Afghanistan, Somalia, and other trouble spots. After Brennan became deputy executive director of the CIA in March 2001, he became the key individual to oversee the operational aspect of infiltrating Atta and his team, along with other Saudi and Bin Laden organization support personnel into the United States. Brennan was so close to Saleh that the president of Yemen would often telephone Brennan rather than President Bush if he needed something accomplished.

Brennan was also aware of Osama Bin Laden's 2002 death from natural causes and his subsequent burial in Yemen from Saleh.

Although Brennan is an Irish Catholic who graduated from Fordham University, he is also a fluent Arabic speaker courtesy of CIA-funded Arabic language training at the American University in Cairo and further Arabic studies at the University of Texas in Austin. Brennan is also a key bridge between the Bush family and Barack Obama.

Brennan can also be legally referred to as "Al Hadj John Brennan." While he was station chief in Riyadh, Brennan made the Islamic "hadj" or pilgrimage to Mecca. Although entry into Mecca is forbidden to non-Muslims, Brennan went as the personal guest of the King of Saudi Arabia who also has the title "Custodian of the Two Holy Mosques" of Mecca and Medina. The King can grant, in special circumstances, access to Mecca by non-Muslims, although the practice is rare. WMR learned that when Fran Townsend, the homeland security adviser to President George W. Bush and another Saudi aficionado, requested permission to visit Mecca based on Brennan's previous visit, all she could muster from Riyadh was a helicopter ride over the city. Townsend today appears regularly on Fox News, part of which is owned by Bin Talal, who has stated that it is his goal to purchase as much media as possible in the United States to change the direction of American foreign policy.

Former FBI counter-terrorism agent John Guandolo surprised a number of people in March when he stated that Brennan had converted to Islam while serving as Riyadh station chief. Guandalo may have been misled by the stricture on only Muslims being able to visit the Holy Shrine and Mosque in Mecca. Brennan would not have had to convert to Islam to visit Mecca because he was a special guest of the custodian of the mosque, the King of Saudi Arabia. More than a few non-Muslim Westerners have been known to have visited Mecca as "special guests" of Saudi officials. 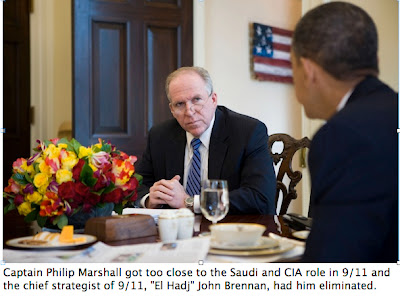 After Brennan retired from the CIA in 2006, he became the CEO of The Analysis Corporation (TAC) (now Sotera Defense Solutions). In early 2008, TAC contractors working for the State Department purged the computer system of all passport records on Barack H. Obama/Barry Soetoro; Stanley Ann Dunham (Obama's CIA/USAID employee mother); and Stanley Armour Dunham and Madelyn Payne Dunham (Obama's Office of Strategic Services/CIA grandparents). The passport records would have revealed Obama's presence in Pakistan in 1981 working with CIA elements to recruit members for the CIA's Mujaheddin army fighting the Soviets in Afghanistan as well as his partridge hunting outings with Pakistanis and Saudis who were supporting the Mujaheddin. In 1981, Obama's mother was the Ford Foundation's regional director based in Jakarta but her CIA assignments took her all over Asia in support of anti-Communist efforts, including Pakistan.

Brennan, after protecting Obama's and his family's passport records and their CIA fingerprints from the rival Hillary Clinton and John McCain campaigns, as well as the public, signed on as national security adviser to candidate Obama. When Obama was elected, Brennan becamse the deputy national security adviser and after General David Petraeus's fall as CIA director over an extra-marital affair, he was elevated to the prized position of CIA director. Brennan's friend, Prince Bandar, has a green light to support Salafist groups and Al Qaeda affiliates around the Middle East and North Africa, including the Al Nusra Front in Syria, Ansar Dine in Mali, the Libyan Islamic Fighting Group in Libya, and Boko Haram in Nigeria

In 2008, Obama promised the families of 9/11 victims that he would seek an accounting of areas that has not been fully examined. Brennan ensured that no such examination would take place and that furthermore, Obama would not conduct any investigation of Brennan's extraordinary rendition program he formulated while director of the CIA's Counter-terrorism Center. One of President Obama's first acts was to visit CIA headquarters in Langley to assure the agency that no investigations of torture, kidnapping, and extra-judicial assassinations of foreign nationals and American citizens abroad would be carried out. The Obama administration meme was that it would "look forward" and not behind. Bush administration officials involved in the 9/11 plot rested easy.

Brennan also ordered a May 2, 2011, assault on a compound in Abbottabad, Pakistan which resulted in a proclamation by Obama that Osama Bin Laden, who had died in Yemen in 2002 of kidney failure, had been killed while resisting apprehension by a U.S. Navy SEAL team. Brennan is also the architect of Obama's drone program, which has the authority to kill non-American and American individuals deemed a threat on foreign or U.S. soil.

When Philip Marshall threatened to expose Brennan and his and the Saudi government's role in the 9/11 attack, a determination was made to apply the president's new powers to "eliminate a threat." Preliminary CIA/Saudi intelligence surveillance of the Marshall house in Murphys, California may have indicated that he was usually alone on weekdays. However, with Marshall's wife in Turkey and his two children staying with him on a Thursday night instead of with their mother in the town of Angels Camp, the hit team was not prepared for other persons being present. Instead of a suicide, a murder-suicide scenario had to be concocted and sold to the local authorities, which is what occurred with the Calaveras County Sheriff's Department concluding that Marshall killed his children and then himself.

It is ironic, perhaps even serendipitous, that it was someone who participated as a bit player in the scandal that almost brought down the Reagan administration, to discover those behind the major scandal of the George W. Bush administration, that is, 9/11.

The man who is the chief suspect in the deaths of Philip Marshall and his children is "El Hadj" John Brennan, the director of the U.S. Central Intelligence Agency.