Just as with the April 2002 coup strife in Venezuela, stirred up by CIA and Defense Intelligence Agency provocateurs in the oil workers' labor sector and in some parts of the military, the CIA is using a slightly different playbook prior to the April 14 election. The upcoming election pits Hugo Chavez's designated successor, Nicolas Maduro, against the Western- and corporate-backed candidate Henrique Capriles Radonski, the governor of Miranda state.

There have already been clashes between "rent-a-mob" and "rent-a-parade" pro-Capriles student provocateurs and supporters of Maduro. The CIA and the U.S. Agency for International Development (USAID), National Endowment for Democracy (NED), and George Soros's Open Society Institute-funded NGOs also have their fingerprints on an increase in robberies of foreigners and others in poor barrios in order to hand Capriles a crime issue to exploit.

Student leaders led by Roderick Navarro have called for the resignation of Defense Minister Diego Molero before the election and banning Chavista civilian militia members from acting as poll watchers. The anti-government activists are attempting to portray the upcoming election as unfair, even though last October's election in which Chavez handily trounced Capriles was deemed free and fair by international election monitors, including the Carter Center led by former President Jimmy Carter.

It is never difficult to spot the CIA's fingerprints on its interference in the domestic affairs of other nations. Due to its roots in Ivy League collegiate secret societies -- the "cloak and gown" mystique -- the CIA throws operational security to the wind and in its braggadocio manner, prefers the use of symbols for its foreign escapades.

During the Cold War, the CIA favored a symbol from the Order of the Illuminati, the torch of Prometheus, the god the ancient Greeks believed stole fire from the heavens for the use of mankind.

Anti-Chavez demonstrators in 2002 with a favorite CIA symbol, the torch of Prometheus.
Not surprisingly, the long-serving president of the CIA-linked National Endowment for Democracy, Carl Gershman, began his anti-Communist activities on behalf of Langley as the executive director for Social Democrats USA (SDUSA), an ostensibly left-of-center party but one that was a front for the CIA among moderate leftists to derail the influence of Marxists and Communists in the Democratic Party and among the labor unions. The tell-tale sign of the CIA is seen in SDUSA's torch symbol (below far left), which it shares with CIA and CIA-influenced contrivances of the right-wing, including Freedom House, the Conservative Party of the United Kingdom, Zaire's Popular Movement of the Revolution led by Zaire's CIA-installed dictator Mobutu Sese Seko, and a long-time nesting ground for far rightists and corporatist, the International Olympic Committee and the Olympic Games. (below, left to right)

The torch also appears on the logo of the 2nd Civil Affairs Company (above) that carried out Civil Operations and Revolutionary Development Support (CORDS) operations in South Vietnam. In reality, CORDS was the CIA's Operation Phoenix, which carried out systematic assassinations of South Vietnamese village and religious leaders.

The Malta Labor Party also uses the torch symbol (above). In 1969, the party split with its internal communist sympathizers after the Roman Catholic Church prevailed on Labor to break from its more leftist principles. As a result of the split, the Malta Communist Party was formed but it never gained any political significance. Meanwhile, the Labor Party moderated its policies. The CIA was pleased at the success of its interlocutors in the Vatican.

In 1972, Michael Oliver, a California Lithuanian Jewish real estate developer who ran an organization called the Ocean Life Research Foundation, and his friend Morris Bud Davis, a former project engineer for the defense contractor North American Rockwell, decided to establish a libertarian nation on some uninhabited South Pacific coral reefs that were claimed by the Kingdom of Tonga and always submerged at high tide. The King of Tonga, hearing of the scheme, laid claim to the Minerva Reefs and announced there would be no Republic of Minerva  -- a country with 60,000, built upon sea platforms, with no taxes, welfare, or subsidies -- in what were Tongan waters. A ship used by the American schemers, who attracted a lot of support from ex-CIA and Special Forces types, planted the Minervan flag and erected a stone edifice upon the reefs, One of Oliver's associates was former Office of Strategic Services (OSS) officerMitchell Livingston WerBell III, whose company, Military Armaments Corporation (MAC), developed the MAC-10 machine gun and silencers for machine guns.

Soon after Minerva's flag was raised over the South Pacific, members of the Tongan Defense Force were sent to the reefs and tore down the Minervan flag and replaced it with the Tongan flag.

The flag of the short-lived Republic of Minerva, complete with the sign of the right-wing, the torch.

Oliver and his group had tried a similar scheme before and after the Minerva operation. They tried to take over the British-governed Turks and Caicos Islands in the Caribbean to establish a libertarian homeland. Britain rejected the deal. There were also attempts to foster secessionist movements in the New Hebrides and, after it gained independence, Vanuatu, as well as Abaco island of the Bahamas, the Azores, and the Isle of Man. There was also an attempt to buy the uninhabited Palmyra Atoll from the Fullard-Leo family of Hawaii.

After the Minerva Reef scheme failed, Oliver and his pals, who included international economic adviser Harry Schultz, the author and distributor the International Harry Schultz Letter on investing, established the Phoenix Foundation in search of a libertarian Shangri-la, Oliver and his colleagues attracted new fans, beyond the CIA agents and mercenary types. Among their new-found supporters were Sir Keith Joseph, the English Jewish Tory, cabinet minister, and follower of the policies of "Chicago School" economist Milton Friedman. Even the "Iron Lady," herself, was a fan of Schultz's libertarian and tax-avoidance schemes. Other fans included apartheid South African finance minister and adviser to the government of Lesotho Owen Horwood and Saudi Oil Minister Ahmed Zaki Yamani.

WerBell's and Oliver's plan to get Abaco to secede from the Bahamas in 1973 was as much a failure as Schultz's and Oliver's attempt to have the Na-Griamel Federation, based on Espiritu Santo and nearby islands, secede from the New Hebrides in 1975. The Americans minted coins for the Na-Griamel Federation and has passports printed up. They even lobbied the United Nations to consider the Na-Griamel cause. After Na-Griamel failed, the American hucksters tried again, in 1980, when they had the Republic of Vemarana declared on the island of Espiritu Santo. There was evidence that the Vemerana rebellion involved elements associated with Israeli intelligence, especially when plans were discovered that Vemerana consulates were to be established in Israel and a major center for the international diamond trade, Belgium. Independent Vanuatu crushed the rebellion with the assistance of troops from Papua New Guinea.

The torch appeared on the coinage of the short-lived Republic of Minerva.

If we follow the use of the Illuminati torch, it soon begins to appear in operations funded by both the CIA and the Soros operation, for example, various Falun Gong movements in China and around the world. One such operation was the "Global Human Rights Torch Relay" used by Falun Gong to highlight their repression in China a year before the Beijing Summer Olympics.

A Soros-funded operation and the "torch."

CIA and Soros-funded street action and other political movements today can be detected based on the symbols used. The torch is one sure sign of such influence, as is the clenched fist, a common sight in Soros-organized themed revolutions and protests around the world. 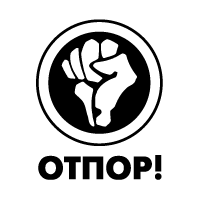 The OTPOR! clenched fist logo is fast replacing the torch as the favored psychological operation symbol used by the CIA to incite street rebellions. OTPOR and OTPOR-trained provocateurs have used the bible for insurrections that was written by Gene Sharp of the Albert Einstein Institution ever since the overthrow of the Serbian government. George Soros's OSI and NED fund many of the actions of OTPOR and its spin-offs, including the Center for Applied Non Violent Actions and Strategies (CANVAS), around the world. Soros operatives also co-opted parts of the anti-Wall Street Occupy movement. In effect, Soros, a billionaire hedge fund manager, simply appropriated a long-used symbol of the international socialist movement, for his own political goals, which just so happen to run
parallel with those of the CIA.

The clenched fist is still used by the Portuguese Socialist Party (above) even though it is now a pro-European Union advocate for the Soros- and corporate-supported Third Way movement of Tony Blair and Bill Clinton.

The UK Socialist Worker's Party, a Trotskyite group, used the clenched fist symbol and referred to the Soviet Union and its Warsaw Pact allies as "state capitalists," playing into the hands of those who wanted to divide the Communist bloc at the height of the Cold War, a long-term goal of Soros. The party's long-time leader was Yigael Gluckstein, aka Tony Cliff, born into a Zionist family in Palestine. He emigrated from Palestine to Britain in 1947.

A number of neo-conservative leaders and pundits of today came out of "New Left" groups like the Students for Democratic Society (SDS), which was active in the 1960s and early 70s. The SDS also used the fist symbol.

Soros influence in the labor movement that sought to recall Wisconsin Republican Governor Scott Walker is clearly seen in one of its symbols (above.)

The clenched fist symbol has been taken up by various fringe single-issue groups like the vegan activist group Food Not Bombs (left) and the environmental activist group Earth First (right).

Soros's influence was seen in the Egyptian revolution and the symbol for the April 6 Movement of mostly young people using social networking technology. The revolution resulted in a Muslim Brotherhood-led government in Egypt.

Soros-funded provocateurs aim to reverse the course of progressive nationalism in Latin America by cooperating with it in a deadly embrace. Venezuela's Capriles is trying to convince voters that he is a social democrat when, in reality, he intends to put Venezuelans through the same meat grinder of global banker-dictated austerity that is squeezing the life out of many European nations. The above fist logo "counter-coup," has a map of South America in its embrace.

Some observers point out that Soros's influence over the "clenched fist" movement worldwide is a mere masking of the actual influences behind these social activism operations. Above are the symbols of the radical right-wing Jewish Defense League (JDL) (left) and extremist Israeli party Kahane Chai (right), many sympathizers of which now dominate the new Israeli government.

In fact, the clenched fist is just as ubiquitous among the right-wing as it is among the nominal left. Below is the symbol of the European Defense League, a neo-Nazi group that is opposed to Muslims living in Europe. These Nazis work hand in glove with groups like the JDL.

Norwegian right-wing mass killer Anders Breivik also used the clenched fist salute in his trial in Oslo. His network was affiliated with the European Defense League and various right-wing Jewish groups opposed to Muslims in Europe.