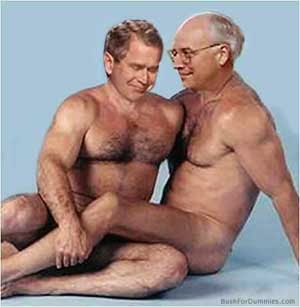 The Senate Select Committee on Intelligence's Study of the CIA's Detention and Interrogation Program, otherwise known as the "Torture Report," contains a number of references to male sexual abuse also seen in past reports about torture at the Abu Ghraib prison in Iraq and Guantanamo.

The sexual abuse centers around inserting objects into the rectums of detainees. In the recent Senate report this activity also borders on coprophilia, a fetish that WMR exposed in the past on this website as one of Vice President Dick Cheney's more prurient interests. Coprophilia is defined as "paraphilia involving sexual arousal and pleasure from feces." Upon its release by Senate Intelligence Committee chair Dianne Feinstein (D-CA), Cheney was quick to defend the interrogation and detention practices revealed in the report.

Not only does the report state that detainees, including Abu Zubaydah, were subject to frequent rectal examinations but they were also subjected to "rectal fluid resuscitation" for "partially refusing liquids." The report states that Majid Khan, a legal resident of the United States from Pakistan, was "very hostile to rectal feeding and removed the rectal tube as soon as he was allowed to."

In addition, Khalid Sheik Mohammed, charged as the planner of the 9/11 attack, was "subjected to rectal rehydration without a determination of medical need, a procedure that KSM interrogator and chief of interrogations, [redacted] would later characterize as illustrative of the interrogator's 'total control over the detainee.'" Another detainee, Marwan al-Jabbur, a native of Pakistan who was later released after being held at various CIA black sites, was subjected to what was originally called an "enema," but was later acknowledged to be rectal rehydration. The report states that Abdul Rahim al-Nashiri, charged with being the mastermind of the 2000 bombing of the USS Cole, and Majid Khan were subjected to rectal feeding. The CIA destroyed tapes of al-Nashiri being waterboarded at the CIA black site, called the "Blue Site," in Poland. Three detainees, Ramzi bin al-Shibh, Khallad bin
Attash, and Adnan al-Libi, were threatened with rectal rehydration.

Medical professionals contacted by WMR said there is no evidence that any nourishment can be achieved by giving someone a colonic enema or rectal infusion of food matter. The Senate report states that Majid Khan was infused rectally with a pureed "lunch tray" of hummus, pasta with sauce, nuts, and raisins. The CIA's June 2013 Response to the Senate committee failed to address the use of rectal feeding with CIA detainees, but defends the use of rectal rehydration as a "well acknowledged medical technique." Doctors WMR consulted rejected the CIA's statement as nonsense. The report also states that the "CIA leadership, including General Counsel Scott Muller and DDO James Pavitt, was also alerted to allegations that rectal exams were conducted with 'excessive force' on two detainees at DETENTION SITE COBALT [located in Afghanistan and known as the "Salt Pit"]. CIA attorney [redacted] was asked to follow up, although CIA records do not indicate any resolution of the inquiry. CIA records indicate that one of the detainees, Mustafa al-Hawsawi, was later diagnosed with chronic hemorrhoids, an anal fissure, and symptomatic prolapse." Al-Hawsawi, charged with being the financier of the 9/11 attack, remains in detention in Guantanamo.

According to the report, it is quite likely that the "rectal infusions" were contained in CIA videotapes of the interrogations of Zubaydah and al-Nashiri. It is also known that live video streaming of interrogations was viewed by senior U.S. government officials. According to the report, "CIA officers were observing the foreign government interrogations of Ammar al-Baluchi via video feed." Al Baluchi, a native of Kuwait accused of being an Al Qaeda financier in Pakistan and Dubai, was held in a CIA black site and is currently in Guantanamo.

After the Senate Intelligence Committee expressed interest in the torture videotapes, the CIA destroyed them on November 9, 2005, according to the report. The number of videotapes held by the CIA and destroyed is not disclosed. The report indicates that other videotapes of torture were destroyed by the CIA beginning in December 2007.

WMR previously reported that live video streaming equipment used by Vice President Cheney and his aides to view torture sessions in his Old Executive Building office was destroyed by a suspicious fire. On May 28, 2009, WMR reported: "On December 22, 2008, WMR reported on the high-tech support provided the Bush-Cheney White House by Mike Connell's GovTech Solutions and his close colleague Jeff Averbeck's firm SmarTech. Connell died last December when the plane he was piloting crashed short of landing in Akron, Ohio. We have now learned that Connell and Averbeck may have been behind the installation of live streaming black boxes in the White House and the Eisenhower Old Executive Office Building used to stream live video of torture sessions in Guantanamo, Cuba and Abu Ghraib to the Old Executive Office Building office of Vice President Dick Cheney's Chief Counsel David Addington and into the White House, itself."

Addington is mentioned a number of times in the Senate report as being a key player in the torture program.  WMR's May 28, 2009 report continued: "The fire that broke out in an 'electrical closet' in the Old Executive Office Building on December 19, 2007, near Cheney's ceremonial office likely contained the live streaming boxes used to stream torture sessions from Guantanamo and Abu Ghraib, according to our sources who added that SmartTech and Airnet have been in the live streaming video business since 2002. With the recent statement of retired U.S. Army General Antonio Taguba that rape and other sexual molestation sessions were prevalent at Abu Ghraib and that they were photographed, the stories of the suspicious death of Connell and the White House fire have taken on new relevancy. As reported by WMR on January 10, 2008: 'Army Major General Antonio Taguba's report on Abu Ghraib prisoner abuse stated that the abuse included 'A male MP guard 'having sex' with a female detainee.' 'Having sex' was an obvious attempt to avoid the use of the word 'rape.' It is obvious that Taguba's report was either altered or some evidence was not shared with him and his investigators . . . Another investigation conducted by Lt. Gen. Anthony Jones and Maj. Gen. George Fay of Abu Ghraib reported male homosexual rape of prisoners but not the rape of female prisoners."

The Taguba report on detainee abuse in Iraq also stated that detainees were sodomized with glow sticks. WMR also reported that U.S. sodomized underage teen at Iraqi detention facilities with broom sticks and flashlights and that videotapes of this abuse were made available to senior White House staff for "entertainment" purposes.

Secretary of Defense Donald Rumsfeld also personally oversaw sexual abuse of at least one detainee. A December 2005 internal US Army Inspector General report leaked to the on-line publication Salon.com described how  Rumsfeld personally monitored by telephone the interrogation of Saudi detainee Mohamed el Qahtani, described as the "20th hijacker." Lt. Gen. Randall Schmidt reported to the Inspector General that the abuse  of Qahtani "looked like Abu Ghraib." Qahtani was forced to wear women's underwear, perform sex acts in front of a woman, and perform "dog tricks" while wearing a leash. The nudity and "stress position" acts were personally approved by Rumsfeld in December 2002.

However, it is Cheney who has been quick to defend the sexually perverse interrogation practices from which he appears to have derived personal gratification. On October 26, 2006, WMR reported that people who knew Dick Cheney in Wyoming before he served in the Nixon administration claimed he always had an unusual penchant for hanging around young girls, some as young as seven-years old. Cheney reportedly walked around his Wyoming home in his underwear, sometimes when his two young daughters' friends were visiting. Cheney did not seem to mind that his activities around his home would inevitably expose his penis to the young girls.

WMR also reported: "Cheney served as a Congressman from Wyoming from 1979 to 1989. This was during a time when two major page scandals, both involving Republican members of Congress, rocked Capitol Hill. They were the Koreagate scandal and the page/prostitutes visiting the White House in the late 1980s. In 1981, Lynne Cheney wrote "Sisters," an Old West novel containing lesbian themes. Dick Cheney's close friend and former chief of staff Scooter Libby penned a novel called "The Apprentice." The following is an excerpt from Libby's book, which features its main character, Yukiko, drawing hair on the 'mound' of a little girl: 'At age 10 the madam put the child in a cage with a bear trained to couple with young girls so the girls would be frigid and not fall in love with their patrons. They fed her through the bars and aroused the bear with a stick when it seemed to lose interest.'"

In 2002, Cheney held a reception for the publication of the second edition of Libby's book at the vice president's mansion.

On June 5, 2007, WMR reported on bizarre and kinky sexual practices engaged in by top Bush administration and other Republican officials by clients of "DC Madam" Jeane Palfrey's Pamela Martin & Associates escort service and other services: "The Bush administration's increasing nervousness about Deborah Jeane Palfrey's phone list is understandable after more details have emerged about some of the more bizarre prurient appetites of some past clients of Pamela Martin & Associates clients, said to include top officials of the Bush administration, Congressional members and staffers, and at least two well-known Washington, DC journalists.
Some escorts regularly paid visits to clients with whips and handcuffs as part of their regular ensemble.
Prostitutes hired by Louisiana Senator David Vitter in New Orleans are reporting that Vitter had a bizarre sexual fetish -- he liked to wear diapers during his trysts.
While that may be weird, some other prostitution clients due to be outed in Washington would appear much more bizarre. WMR has learned that certain VIPs who engaged the services of 'fantasy' escorts enjoyed what is known as 'water sports' -- firstly, practices that involve urination and, 'number two,' activities that are even worse.

Cheney's coprophilia fetish was the subject of WMR's April 11, 2008 report, "Cheney, according to knowledgeable sources involved in the Palfrey trial, paid at least one escort to straddle a glass top table and defecate on it while Cheney peered at the bowel "evacuation" from underneath" The act was performed before Cheney became vice president at a town home next door to his own residence at Madison of McLean, an upscale housing development in McLean, Virginia close to the CIA's headquarters. Palfrey, had been found guilty of racketeering, mail fraud, and money laundering on April 15, 2008, just four days after WMR published its report about her escorts being involved in coprophiliac activities with Cheney. On May 1, 2008, Palfrey was found hanging in a utility shed at her mother's home in Tarpon Springs, Florida. Police ruled the death a "suicide."

After WMR's report on Cheney's use of Palfrey's escorts ran on the front cover of The Globe supermarket tabloid, the editor was informed that Cheney's aides pressured two local retailers, Giant Food and Safeway, not to carry that issue. However, CVS pharmacy did sell the issue.